Italy′s ghost towns lie in rubble 2 years after quake | Europe| News and current affairs from around the continent | DW | 06.10.2018

Two years after a devastating earthquake, the town of Visso still looks as if the disaster happened yesterday. Bureaucratic chaos has forced many to move away, and reconstruction has yet to begin. Ylenia Gostoli reports. 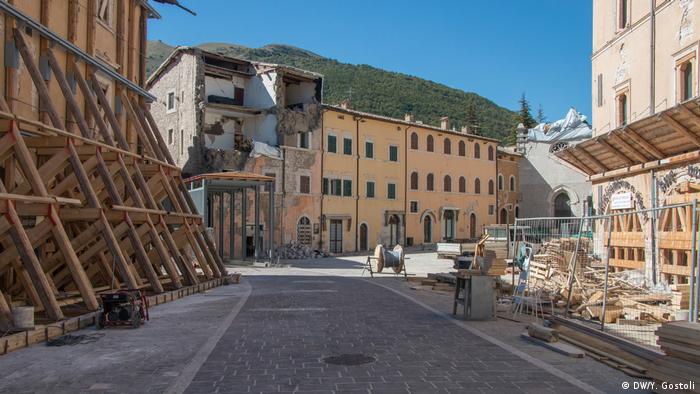 A pair of socks and a shirt on a drying line stretched across a window may seem like a sign of life amid the silence that still envelops the old town of Visso, two years after a 6.5 earthquake hit the town.

But the laundry is a sign that nothing here has changed much since the night when Visso's residents — officially 1,200 — were loaded onto buses and taken to hotels and bed-and-breakfasts on the coast.

The house, a three-story arched building at the edges of the medieval hamlet, is located in what is now the town's largest no-go area, the historical center, where nearly every building has been damaged by a series of earthquakes that hit central Italy between August and October two years ago. They left 300 dead, several injured, over 2.5 million tons of debris and 48,000 people displaced. The strongest to hit Visso was on October 30, when the epicenter was in Norcia, less than 30 kilometers (18 miles) away.

Some residents have now returned and live in emergency wooden homes scattered in small settlements along the road that crosses a green valley and leads to the heart of the Sibillini mountains in the Apennine, the mountain range that cuts through the Italian peninsula from north to south.

Every few years, the earth around these mountains trembles to produce a natural disaster: in 2012 it hit the Emilia-Romagna region; in 2009 it was nearby L'Aquila. If anything is to be considered a surprise in this latest tragedy, it was its strength, unparalleled in recent decades.

A town in ruins

"They are still working on safety measures," said Ernesto Martini, a local traffic policeman, as the sound of drilling from a construction site broke the silence hanging over the old town. Many homes, partly collapsed, still lie in their own rubble.

According to environmental organization Legambiente, as of August 2018, only 40 percent of rubble had been removed from public buildings across the territory affected. As for private buildings, rubble can be removed only once a reconstruction project is approved. These streets speak for themselves.

"With a disaster of this scale, one can expect things to go wrong," Martini told DW, leading the way through collapsed restaurant signs and fading placards explaining the town's history in various languages. "But to get everything wrong, you must try hard."

Visso used to live on tourism, partly built upon the existence of second homes people kept in this picturesque but out-of-the-way part of the country.

There has been a hemorrhage of residents in the past decades, as hundreds of hamlets like Visso across Italy went through gradual depopulation. The earthquake has provided the ultimate incentive for some of the families to move out, as they found work or started sending children to school on the coast.

Martini believes that more should have been done to revitalize the local economy and encourage people to come back.

"The money is there," said Riccardo Bucci, a lawyer with the organization Fabbrica dei Diritti (Rights Factory), which has been supporting those affected through the maze of decrees and measures adopted to face the emergency and reconstruction.

Italy's civil protection department and the EU have estimated the total damage, including the earthquakes in January 2017, at €23.5 billion ($27 billion).

Read more: Amatrice: One year after the devastating earthquake 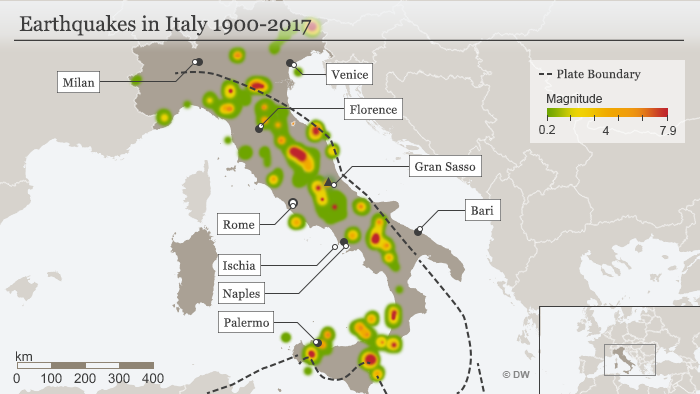 So where's the money?

According to an impact assessment report published by the Italian Senate last year, Italy has allocated a total of €13.2 billion, mostly to reconstruction, over 30 years, with more than half of that expected to be spent between 2016 and 2019. Another €1.2 billion was granted by the EU's solidarity fund for public expenditure, and €200 million came out of the European Regional Development Fund, in addition to another €200 million to be distributed via grants and national co-financing.

"The problem is how the money was allocated at a strategic level, what they decided to do and not to do," Bucci told DW. "Given what happened in L'Aquila, where the aftermath of the earthquake was poorly managed, here we have seen, on the opposite end of the scale, a burdensome bureaucratic chain." 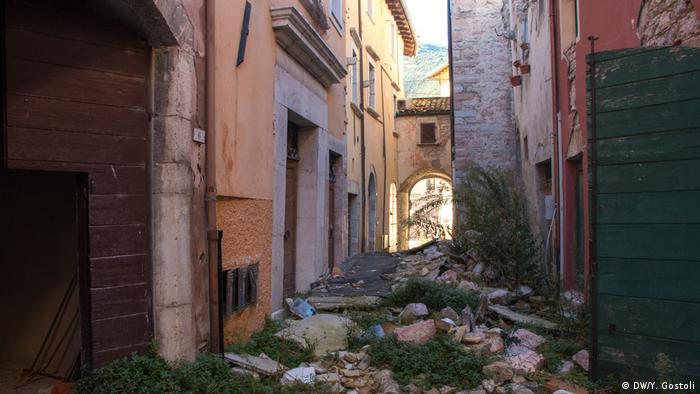 Parts of Visso still look as if the earthquake hit yesterday

But not everyone has waited as long to come back. Some residents, like farmer and butcher Fabio Troiani, never left.

"Welcome back," said a customer before leaving Troiani's new store, which re-opened at the end of September in a shiny new wood and iron structure.

"[After the earthquake] there was no one left here other than the police, firemen and security personnel," recounted Troiani, a towering 60-year-old with a salt-and-pepper mustache.

"I came back the day after. At first they didn't want to let me through. But my farm is here, and I never left again," he told DW.

For the next 18 months, his family of four lived in a caravan alongside 32 other people who set up camp near the sporting club, which provided showers and basic facilities.

As for his actual home, which was subject to minor damage, reconstruction work is far from getting started. "I have given up on the idea of sleeping in my house again," he said.

The state here is seen as a hindrance, rather than a facilitator of recovery. The message of Interior Minister Matteo Salvini, "Italians first," has found considerable resonance in a place that was already leaning politically to the right.

Down the road, Lina and Fabio Cerri have rebuilt the bakery they used to run in the old town in a white prefab building. They put a table and some flowers outside, under a simple sign that reads L'albero del pane (The Bread Tree).

While the earthquake destroyed their bakery and home, their pastry shop remained. It made sense to start from there.

"A few months after the earthquake we started doing things to avoid leaving all our sacrifices and money buried under there," Fabio told DW. 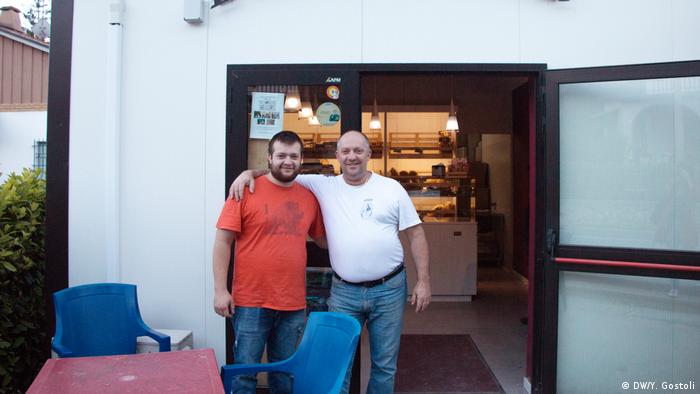 Every day, they traveled 120 kilometers each way from the coast to keep the pastry shop running. Their customers, at first police and army personnel and later returning residents, appreciated a place to rest in the deserted town.

In April 2017 they reopened the bakery, pulling the recoverable machinery out of the rubble of their former shop, and have now rehired all except one of their employees.

According to a government program, business owners who have reopened shops elsewhere should receive subsidies, while lost income should result in compensation. But so far for the Cerris, it all came together through loans and donations.

"I am starting to question: Is the money there?" said Alessandro Morani, a 45-year-old who runs a phone shop in a prefab just down the road from its former location.

"They say the money is there, but due to mafia infiltration and criminals controls have to be super thorough. But too much bureaucracy means that at this pace, Visso might be rebuilt in 20, 30 years. We know we can no longer look at the city center as a place to gather. The first mistake was choosing to send people away. The moment you depopulate a territory and you don't bring people back within a short time, you encourage them to not return."

Earthquake-prone Italy has a history of rebuilding without learning from the past. Geologists are not alone in hoping this time will be different. There are signs it may be, reports Megan Williams from Accumoli and Rome. (29.08.2016)