The Italian government has approved a law ordering parents to vaccinate children or face fines. The authorities have noted a rise in measles cases, which the cabinet blames on "the spread of anti-scientific theories." 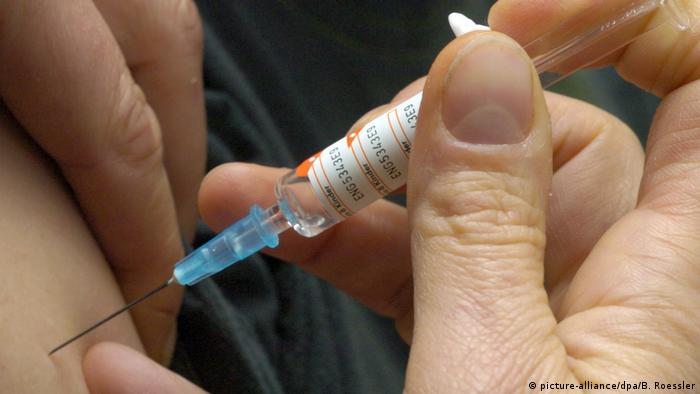 Berlin outbreak blasts hopes of eradicating measles in Germany by 2015

There's new pressure on parents to vaccinate their kids against measles as outbreaks spread in California and Berlin. Germany had wanted to eradicate measles by 2015. Some are blaming migrants and tourists. (05.02.2015)

The new legislation makes vaccines mandatory for 12 preventable diseases, including measles, chicken pox, polio, hepatitis B, and tetanus. Only children with immunizations would be eligible for nursery school, according to the Friday law.

"The lack of appropriate measures over the years and the spread of anti-scientific theories, especially in recent months, has brought about a reduction in protection," Prime Minister Paolo Gentiloni told a news conference in Rome.

Italy has noted a sudden spread of measles in recent years, with the number of infections rising from 250 in 2015 to 840 last year. Medical authorities have already detected over 2,395 cases since the beginning of 2017, and the US warned visitors to Italy to guard against the disease.

Experts believe that the epidemic is due to people refusing to vaccinate their children. The world-wide anti-vaccination movement has been gaining traction in recent years, despite its theories being discredited by the scientific community. The public in Italy has been highly receptive to the debunked link about vaccines causing autism.

The ruling parties accuse the opposition 5-Star movement for feeding the climate of fear over vaccines. The populist movement criticized the vaccination reform as a gift to pharmaceutical companies.

"5-Star is riding the wave of disinformation, nourishing fear and favoring a position that is anti-science and dangerous for the whole community," said Federico Gelli, a deputy from the ruling Democratic Party.

Representatives of the movement abstained from a vote that would oblige schoolchildren in Rome to be vaccinated on Thursday.  However, Paola Ferrara, 5-Star's leader in city hall, said she considered vaccinations to be "essential."