Italy knocked out of World Cup by Sweden after stalemate

Italy have failed to make the World Cup for the first time since 1958 after they were held to a goalless draw by Sweden. The four-time winners had plenty of the ball but couldn't overturn a 1-0 first leg deficit. 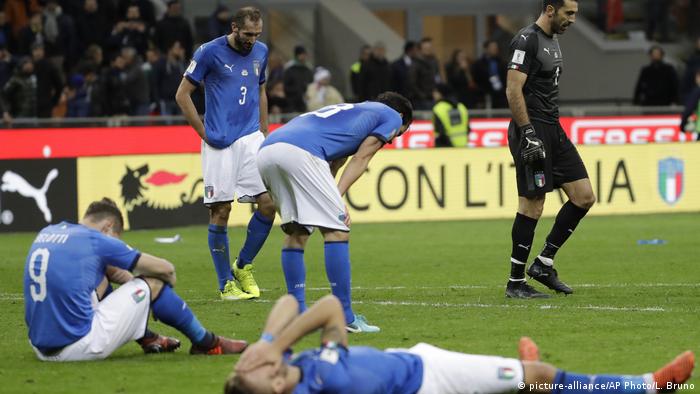 As the seconds ticked down on Italy's World Cup qualifying playoff with Sweden in Milan, the storied career of Gianluigi Buffon, the man who has been their last line of defense for 20 years, was suddenly coming to an end in the opposing penalty area.

The presence of the 39-year-old keeper at that end of the field was the telltale sign of the Azzurri's ultimately fruitless desperation. This isn't supposed to happen to them.

Buffon couldn't get on the end of the corner, just as Italy's outfield players couldn't turn their territorial dominance into something tangible. At the final whistle, it was the men in yellow shirts who were running triumphantly around the San Siro while Buffon confirmed his 175th cap will be his last, and probably most painful.

The scoreless draw meant that Italy, who was forced into the playoff round after finishing second to Spain in their qualifying group, will not participate in a World Cup for the first time in 60 years.

"I'm not sorry for myself but all of Italian football," he said through tears after the game. "We failed at something which also means something on a social level. There's regret at finishing like that, not because time passes." 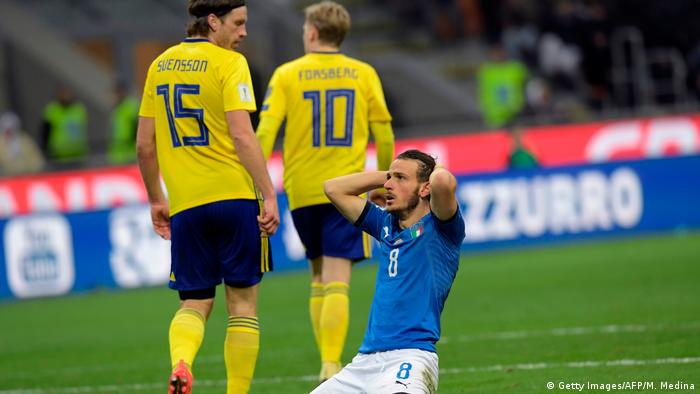 Early penalty drama at both ends

A scrappy, and at times tetchy, opening half was defined more by what didn't happen than what did.

First Sweden’s Ludwig Augustinsson clumsily took down Marco Parolo from behind in the box on seven minutes before Emil Forsberg’s flick was handled by Italy’s Matteo Darmian at the other end five minutes later. Then Forsberg, who plays for RB Leipzig in the Bundesliga, had another penalty shout, this time after his pass struck Andrea Barzagli’s hand. All three could easily have been given but none were and Forsberg was booked for his protest.

As the half wore on, Italy saw more and more of the ball. Their pressure finally forced a pair of opportunities five minutes before the break. First the impressive Jorginho split the deep Swedish defense to find Ciro Immobile but the former Dortmund man could only hit then keeper on the turn, then Parolo nicked the ball off Immobile's toes but blazed over.

The deadlock remained but Italy had built up a head of steam, with Manolo Gabbiadini denied by a last ditch block and Alessandro Florenzi drawing a smart save from Robin Olsen after a lovely piece of skill on the hosts' left flank.

Switzerland and Croatia qualify with draws 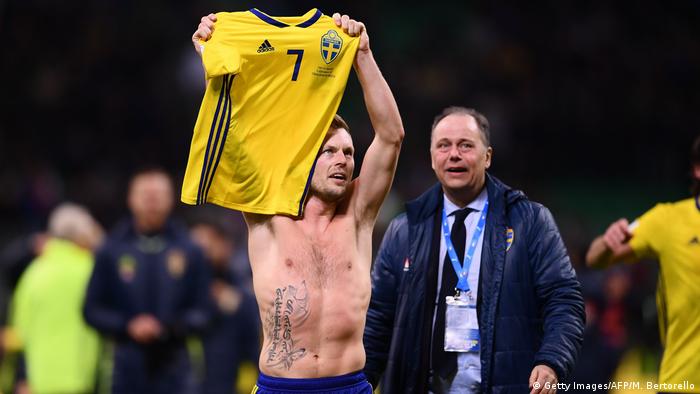 The pattern had been set. Italy continued to press forward after the break, with the visitors happy to defend the edge of their box. The Azzurri came close to a breakthrough on 53 minutes when Parolo's acrobatic volley rolled agonisingly past the post before Immobile almost turned in a cross just after the hour mark.

As the home side threw more and more men forward, Sweden started to create a couple of promising situations on the break but they came to little.

For all Italy's possession — 75 percent by the final whistle — and increasing desperation, Immobile's first half chance remained their best until Stephan El Shaarawy's stinging volley four minutes from time as Sweden held firm against the tide of blue. In truth, the Italians didn't have a player who looked capable of picking the lock.

Nevertheless, Sweden are a side the Azzurri are expected to beat. As it was, they couldn't even muster a goal in 180 minutes of trying to break down their Scandinavian opponents. That ultimately condemns them to miss next summer's World Cup, a low point for a storied footballing nation.