Rome has blocked the entry of Italian and German vessels carrying more than 110 migrants. The decision paves the way for another standoff with migrant rescue groups after one ship recently forced its way into Lampedusa.

The Italian government on Friday refused to allow two migrant rescue ships to land, just hours after the country's coast guard intervened to pick up a third group of migrants off the coast of Lampedusa.

Interior Minister Matteo Salvini said the Alan Kurdi, a vessel operated by the German charity Sea-Eye and carrying 65 migrants, could not dock at an Italian port.

"They won't come to Italy, there is a Maltese port available, or they can choose between Tunisia and Germany," Salvini was cited by Italian media as saying.

The vessel picked up 54 migrants from a rubber dinghy off Libya on Thursday.

Malta has said it will take the migrants if Rome takes a similar number already landed in Malta.

But MSH refused to sail the ship to Malta because of the distance and psychological conditions on board. 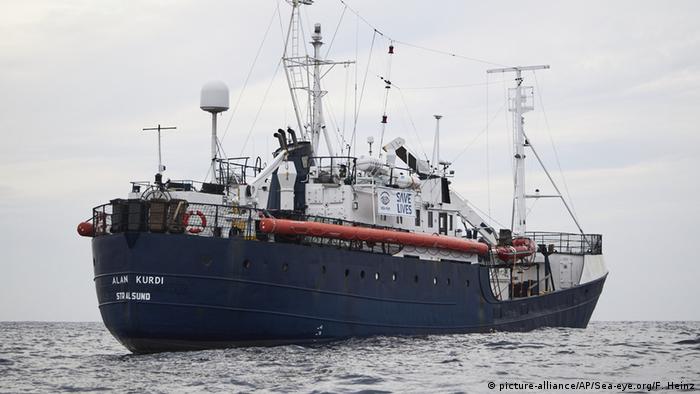 The charity warned the Italian government it was acting unlawfully as Rome can't ban an Italian-flagged shop from entering its waters.

The migrants had been transferred from the Sea-Watch 3, a German vessel, which rescued them in Libyan waters.

The same ship was involved in a 17-day standoff with the Italian government, which climaxed on Saturday when the captain defied orders and forced her way to a dock in Lampedusa's main port.

She was arrested for disobeying orders and allegedly aiding illegal immigration.

Since the election of a populist government in 2018, Italy has taken a hard line on accepting migrants rescued in the Mediterranean.

Salvini has closed ports to boats arriving with migrants. Italian authorities have insisted that migrants rescued in Libyan waters are the responsibility of the Libyan coast guard, and have accused NGOs who rescue migrants off the North African coast of facilitating people smuggling.

Smugglers are turning to perilous routes through the desert, or even dumping those hoping to reach North Africa. DW visited the transit hub of Agadez where efforts are being made to rescue migrants lost in the Sahara. (04.07.2019)

'Good Samaritans should not be prosecuted for helping people'

Amnesty International's latest report from the US-Mexico border focuses on activists looking to assist would-be migrants. Its author Brian Griffey says some of the state's steps amount to "contempt for the rule of law." (02.07.2019)