Matteo Renzi has received the go-ahead to push on with controversial labor reforms meant to pull the country from the brink of another recession. 'Italy is really changing,' Renzi said after the confidence vote. 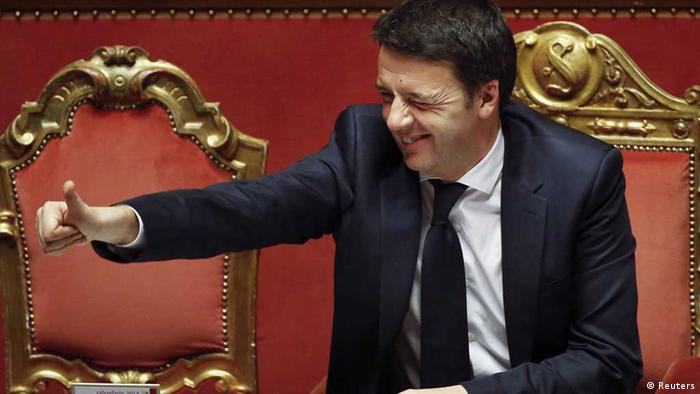 Italy looks headed for one of the biggest labor market shake-ups in years, after Prime Minister Matteo Renzi on Wednesday won parliamentary approval to press on with sweeping reforms.

The so-called Jobs Act is part of the 10-month-old government's ambitious push to jumpstart an economy that's all but ground to a halt and is veering towards its third recession in six years.

"The Jobs Act will become law. Italy is really changing," Renzi tweeted after the confidence vote passed with 166 yeas, 112 nays and one abstention.

Renzi is facing strong pressure at home and in Brussels to breathe new life into an economy that has shrunk by nearly 9 percent since 2007.

Stuck at 13.2 percent, the eurozone's third-largest economy is battling with its highest unemployment rate on record. Youth unemployment is more than three times that, standing at a crushing 44.2 percent.

To change this, the Prime Minister wants to make it easier to hire and fire workers, cut the number of temporary contracts and extend jobless benefits to more people, which he said would also help attract investment.

While many details remain vague, Renzi's proposed reform plans have already pitted many members of his own Democratic Party against him and angered trade unions.

Critics claim that watering down employment protection rights would pull the rug from under new entries to an already wobbly job market.

The nation's biggest union, the CGIL, has threatened nationwide demonstrations and said it is planning to hold a general strike over the Jobs Act. The USB trade union association also vowed to fight to block the reform. In October, hundreds of thousands swept the streets of Rome in protest against the law.

Last week, the European Commission bought Renzi some much-needed time to make good on his promise to put his country on the road to recovery, when it announced it would hold off judgment on Italy's 2015 budget until March.

Italian Premier Renzi has threatened to spotlight the costs of running Brussels institutions as EU leaders turn to debating budgetary plans for 2015 on day two of their summit. Italy and France are pushing for leeway. (24.10.2014)

Demonstrators have taken to the streets in many Italian cities to protest against the government's labor and social reforms. The protests coincide with the release of economic data showing Italy is back in recession. (14.11.2014)

Italy's largest trade union group has called a general strike in protest of the government's social and economic policies. Labor action will be directed at recent austerity measures to meet budgetary requirements. (12.11.2014)