"We have no use for staged events," the Italian PM has said one day after a meeting of European Union leaders. Renzi had refused to appear during closing press conference with his German and French counterparts. 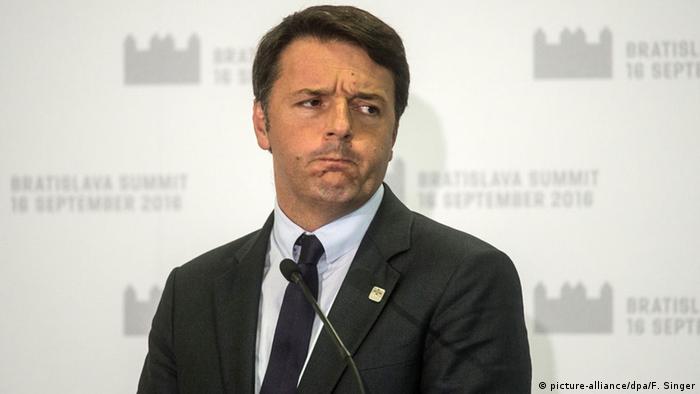 "I don't think it would be right for Italy to pretend not to notice when things are not getting any better," Renzi said at a conference in Florence.

Hours earlier, he criticized the summit in an interview with TV broadcaster RTV38.

"As Italy, we strongly believe that the EU has a future, but we need to be doing things for real, because we have no use for staged events," he said.

Renzi also said he did not partake in the closing press conference with German Chancellor Angela Merkel and French President Francois Hollande because he was unhappy with the decisions reached concerning economic and migrant policy.

Renzi said Italy would not "serve as a fig leaf" for the likes of France or Germany.

In what was the first European summit without the United Kingdom in over four decades, European leaders sought to show unity in the wake of this summer's Brexit vote. This, Renzi said, "signals a small step forward, but it is still a rather long way away from the idea of Europe that we have in mind."

On the frontline of the migrant and economic crisis

Renzi castigated the summit for not raising the African migrant issue. The documents "didn't even mention Africa," he said.

As the first European destination for migrants arriving from Africa, Italy has been left to cope with the influx of refugees largely on its own while politicians debate how to address refugees in Turkey and along the so-called Balkan Route though Greece, eastern and central Europe. Italy has long pushed for an international agreement with African states that would close migrant routes to Europe in exchange for increased investment.

Renzi repeated his critiques of the EU's austerity policy. While the country is respecting the EU's strict budget disciplinary rules, he said Italy retains the right to stress that the rules are not working and it is not prepared "to pretend not to notice."

The Italian prime minister said he will insist that the EU allows Rome to derogate from its budget discipline targets and invest in building earthquake resilient schools. In August, a major earthquake destroyed three towns in central Italy and killed almost 300 people.

Italy's economic health, however, has come under the spotlight in recent months, with many experts warning of looming banking crisis.

Renzi is also facing increasing pressure domestically ahead of the upcoming referendum on constitutional reforms expected to be held in November or December. He has pledged his political future on the result, saying he will leave politics if the reforms are rejected. Polls suggest a close outcome.

The Italian press speculated that Renzi's outburst was designed to win over voters aggrieved with Brussels. The country has reportedly become markedly more eurosceptic in the recent years.

EU leaders have been looking for a way out of the crisis triggered by the Brexit vote. They've now agreed on a road map designed to move the EU forward, but the refugee question remains unanswered. Barbara Wesel reports. (17.09.2016)

Nearly half of Italy's population wants to leave the EU, the country's economy is among the worst in the eurozone. Can the government solve this? Sandro Gozi, European Affairs Minister, is on Conflict Zone this week. (14.09.2016)

The European Union heads of state and government are meeting to talk pandemic strategies and diplomacy. They are also set to welcome Joe Biden at the videoconference.