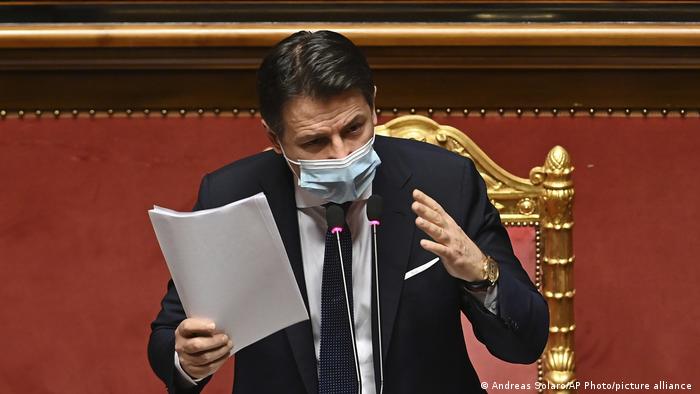 Italian Premier Giuseppe Conte made an impassioned plea to members of the upper house on Tuesday, a day after he survived a confidence vote in the Chamber of Deputies, the lower house.

"With today's vote, I trust that the institutions will be able to repay the trust of citizens in order to put behind us this great act of irresponsibility as soon as possible," Conte said, referring to the political crisis caused by the withdrawal of a junior coalition partner from his government.

The prime minister is hoping to secure enough votes from opposition and independent lawmakers in the Senate vote on Tuesday, which is expected to be a bigger challenge than the Monday's lower house vote.

Conte's government won the lower house vote by 321 to 259 — a wider margin than expected.

The premier had earlier appealed to liberal, pro-European lawmakers to support his beleaguered government or risk handing power to the nationalist right.

Conte's coalition has been on the brink since the country's former prime minister Matteo Renzi withdrew the support of his Italia Viva (Italy Alive) party last week, depriving Conte of his majority in the Senate.

Renzi, who quit the government citing disagreement over Conte's handling of the twin coronavirus and economic crises, said his party would "probably" abstain in Tuesday's vote — as it did on Monday. His party's vote against Conte would have made the chances of Conte's survival even more difficult.

"I assure you it's very hard to govern in these conditions, with people who continuously place mines in our path and try to undermine the political balance patiently reached by the coalition," Conte told the Senate.

Conte will be forced to resign from his post if he loses the Senate majority. Political analysts have put Conte on 157 votes, four short of an absolute majority.

"Numbers are important, today even more so. But even more important is the quality of the political project," Conte said. "We ask all the political forces to help us relaunch with the maximum speed and help us repair the damage to citizens' trust that the crisis has produced."

The premier, who came to power in 2018, does not need an absolute majority to remain in office; he only needs to win the Senate vote. But experts say that leading a minority government would make it difficult for him to pass crucial legislation.

Minority governments are rather common in Italy, which has had 29 prime ministers and 66 governments since 1946.

Conte is facing an unprecedented challenge to revive the economy, with parts of the country currently under partial COVID-19 lockdown. He also needs to push a €220 billion ($196 billion) European Union recovery package through parliament.

Out of service – Italy's unused hospital