Italian senator and Holocaust survivor Liliana Segre, who receives 200 social media threats daily, has been given a police escort. Three right-wing parties abstained as an anti-hate committee was initiated in parliament. 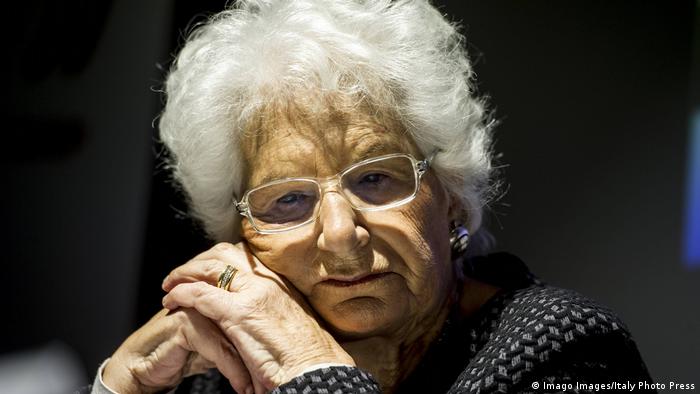 Italian state radio reported Thursday that Milan's prefect had assigned a Carabinieri paramilitary police security detail to Segre because of the 200 threats and insults she received daily.

She was, however, only being accompanied when attending public events, added her chief of staff, Paola Gargiulo, saying Segre also received "vastly more messages of support."

Anti-Semitism researcher Stephao Gatti said, nevertheless, that the persistent threats against Segre were "very worrying" for Italy's Jewish community of 30,000 as well as larger Jewish communities in France and Germany.

And the threats are "not coming just from extremists," he added, referring to Holocaust deniers and others on the far-right in Italy.

The League and Brothers of Italy asserted that Segre's initiative would lead to censorship.

"We should all be united in some things, such as basic values," said Parolin, according to Italian online media.

The Corriera della Sera newspaper reported Thursday that the abusive campaign directed at Segre went back "at least" to 2018, when Italy's Prosecutor's Office opened a file, followed by Interior Minister Luciana Lamorgese setting protection among her priorities.

Last Sunday, soccer forward Mario Balotelli, who is black, became visibly upset and nearly left the field when subjected to monkey chants in a further sign of growing racist attitudes in Italy.

On Thursday, Agriculture Minister Teresa Bellanova tweeted support for Segne, writing: "the politics of hate will not stop your commitment, nor ours."

Gatti, a researcher at Milan's Center of Contemporary Jewish Documentation (CDEC) said up until early November 190 anti-Semitic incidents had been reported in Italy — compared to 153 for all of 2018.

Most were defamatory abuse directed at prominent Jews, said Gatti, and seldom cases of violence.

Examples included a Jewish woman slapped in the northern province of Cuneo this year and a Jewish professor who was spat upon in Rome,

Ruth Dureghello, head of Rome's Jewish community and on a visit to Auschwitz with students, said last week's vote outcome in parliament manifested a "climate that has changed."

In 1944, Segre was deported from Italy to Auschwitz-Birkenau as a 13-year-old girl.

Of the 776 Italian children under 14 years old deported, only 25, including Segre, survived.

In recent years, she has dedicated much of her time to visiting schools to recount the horrors of the Holocaust perpetrated under Nazi German rule during World War Two.

The Italian FA has fined Serie A and Rome club Lazio after their supporters were found to have distributed anti-Semitic material featuring Holocaust victim Anne Frank. However, they have avoided a stadium ban. (25.01.2018)