Israel′s Women of the Wall win equal right to pray | Europe| News and current affairs from around the continent | DW | 21.02.2016

Israel's Women of the Wall win equal right to pray

For decades, the Women of the Wall group has fought for the right to pray alongside men at Jerusalem's Western Wall. New problems have arisen since Israel's government agreed to a mixed prayer zone, Tania Krämer reports. 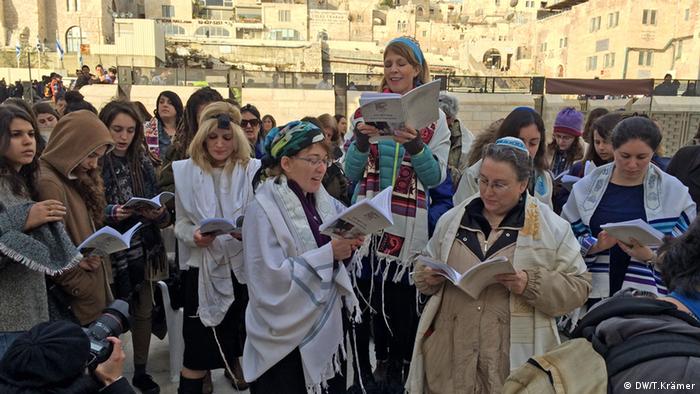 "It is a wonderful achievement, but none of us is retiring yet," Lesley Sachs says with a satisfied smile. "We have a lot of work ahead of us in order to make sure it will be implemented." At 6:30 on a chilly Jerusalem morning, the director of the organization Women of the Wall (WOW) is on her way to the Western Wall as always on Rosh Hodesh, the first day of month in the Hebrew calendar. But this time marks the first group prayer of women at the Kotel, as the Western Wall is locally known, since Israel's government decided to establish a new area where women and men can pray together.

Some described it as a historic step, while Prime Minister Benjamin Netanyahu called it pragmatic. 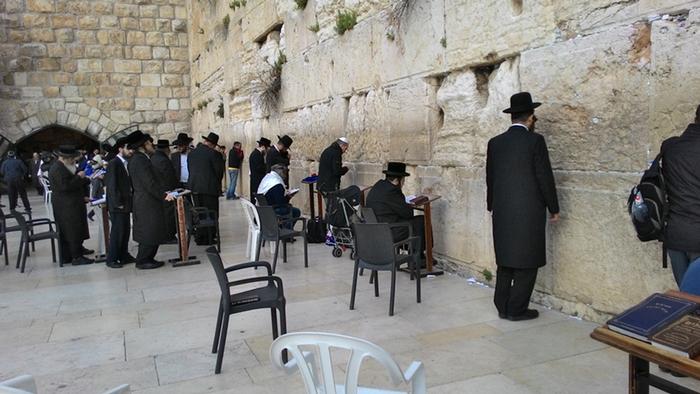 Currently only men can actually get up close to the wall

Nonetheless, the decision remains highly controversial. Currently, there is one prayer area at the Western Wall of the Temple Mount, which is the holiest site for Jews. It's divided into a larger section for men and a smaller one for women and controlled by Israel's Orthodox chief rabbinate.

According to the deal reached last month, the mixed zone is to be established on the southern part of the Western Wall. An already existing platform for prayer there will be expanded to touch the wall, and a shared gate will lead to all prayer areas. This zone will be managed by a non-Orthodox committee.

That is strictly opposed by the ultra-Orthodox.

"We started this battle with some of us as single women, and some of us have grandchildren now," Sachs says. "We changed the state of Israel in so many ways. The holiest of the holiest places is now going to be enlarged - and that is one of the best features of this agreement."

For the first time, Sachs says, the state was obliged to recognize that there is more than one way to worship. The decision is also viewed as an achievement for liberal and reform Judaism though WOW's members come from all kinds of backgrounds. A small number of women in the organization have rejected the deal.

On this morning more than 50 WOW members have gathered at the women's section of the Western Wall. Some wear their prayer shawls and tefellin, and sing and pray loudly together. Usually this causes some ultra-Orthodox men from the neighboring men's section, separated from the women by a wooden barrier, to shout at them.

Women are supposed to pray in silence, according to the ultra-Orthodox, so that men won't feel disturbed by their presence. Today, however, the situation is relatively calm, though a few hollered insults come their way. 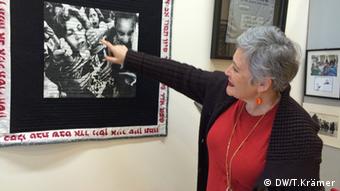 "We didn't know what to expect," says Sachs, who appears relieved. "After the decision, ultra-Orthodox newspapers published a lot of incitement. And also on social media - nasty things were written about us, but so far it has been a joyful atmosphere for us here today."

In the past, not only were prayers by WOW often disturbed by ultra-Orthodox worshipers - men and women alike - but some WOW members had also been detained by the police.

Within the Orthodox community, the decision to establish the new mixed zone is highly controversial, though not without advantages.

"I think [women] should not be there at all, but of course there is some kind of relief that they are not going to disturb our prayers anymore," says Yitzhak Pindrus, a member of the ultra-Orthodox Degel Ha Torah Party and the Jerusalem City Council.

"But giving them a place in that area, I don't think it is correct," Pindrus says. "They should go and pray at [nearby] Mount Herzl or on Ammunition Hill. I don't see any reason why they should come to the Western Wall at all."

The plans are not just controversial within Jewish religious circles: Some experts see them as just as politically charged.

To Palestinians the enlargement of the area is a violation of the status quo at the highly sensitive locale, which is holy to both Jews and Muslims.

Known to Jews as the Temple Mount and to Muslims as the Haram al-Sharif, this is the third holiest site in Islam, including as it does the Al-Aqsa mosque and the Dome of the Rock. It has always been at the center of the Israeli-Palestinian conflict over Jerusalem. Even though the site is managed by the Jerusalem Waqf, an Islamic trust, Israel has controlled access to the compound since 1967.

Non-Muslims can visit the Muslim part, but Jews are, in principle, not allowed to pray on it. In recent years, however, ever more religious Jews have visited the compound to pray, sparking tensions with Palestinians.

The Palestinian Authority has criticized the plans, and the Waqf has issued warnings about the implications. 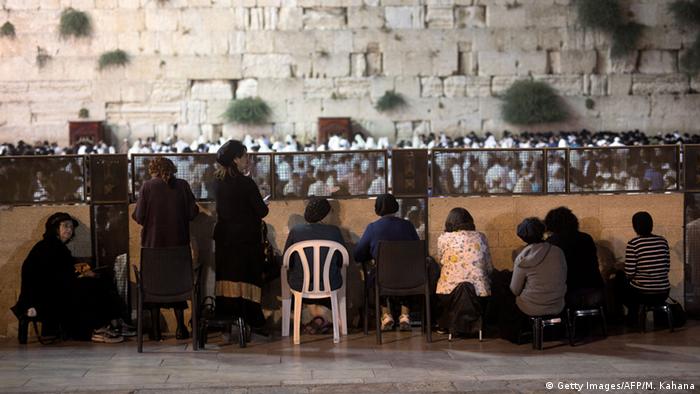 "When it comes to them wanting to resolve the issue with the Jewish women who pray, it cannot be at our expense," says Sheikh Ikrima Sabri, head of Jerusalem's Supreme Islamic Council and a former grand mufti.

"They should resolve their problems away from us, because what is happening now imparts a Jewish veneer on the area and destroys Islamic archaeological sites," he told DW.

The zone on the southern side of the Western Wall is also home to an archaeological garden, which is why some Israeli archaeologists have also voiced concern about turning in into a wider prayer area.

"We have to keep the antiquities as they are. We have been trying to do that for the past 40 years," says Israeli archaeologist Meir Ben-Dov. "Here, we have antiquities from the Second Temple Period, Byzantine and Muslim. We have 20 different stages of history in this area alone. I call it 'from Solomon to Solomon,' our King Solomon to Suleiman the Magnificent."

Ben-Dov is familiar with almost every stone. He was one of the first Israeli archaeologists to conduct wide-scale excavations in the area after the 1967 Arab-Israeli War and has always insisted on preserving antiquities from different epochs, including Islamic periods. 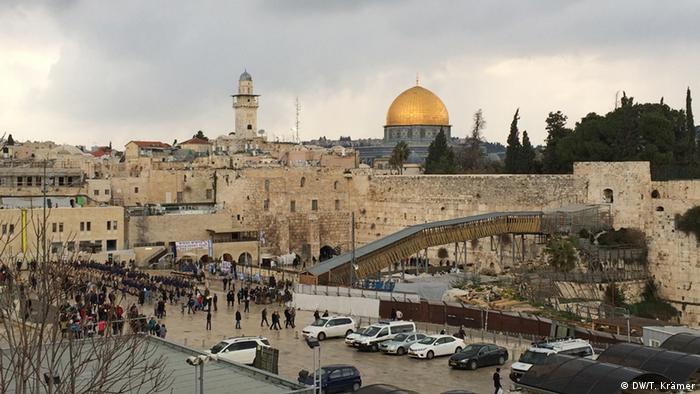 "It cannot be that some people decide for all of us - and the whole world - what will be done here," Ben-Dov tells DW. What is done with this particular area should be part of peace talks, he says.

It is not yet clear when construction will begin for the mixed prayer zone.

"We really have to push now so that this decision will be implemented," Sachs says. Some observers estimate it will take years. Until then, the women of WOW will continue to pray, loud and clear, as they put it, in the current women's section at the Western Wall.