Israel is a step closer in forming a new government and seeing the end of Benjamin Netanyahu's years as prime minister. Parliament must still approve the coalition deal. A vote could take place within the next two weeks. 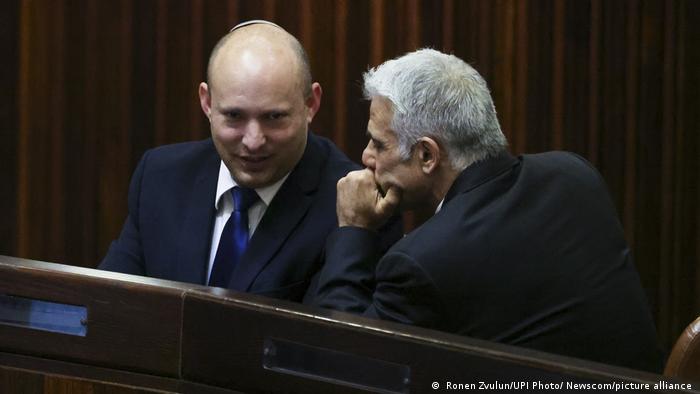 Israel's new coalition government will be one the most unusual governments Israel has seen in recent years and potentially one without the country's longest-serving prime minister, Benjamin Netanyahu.

In the last hour before a midnight deadline expired, Yair Lapid, leader of the centrist Yesh Atid party and mandated to form a new coalition, informed Israel's President Reuven Rivlin that he had succeeded in forming a government. "I commit to you, Mr. President, that this government will work to serve all the citizens of Israel, including those who aren't members of it, will respect those who oppose it, and do everything in its power to unite all parts of Israeli society," his statement said.

The broad and diverse coalition includes former allies of Netanyahu, hard-line right-wingers, centrists and left-wing liberals. The new coalition will also see, for the first time, the direct support of the small Arab Ra'am party, the political branch of the Islamic movement in Israel, which signed the deal two hours before the deadline. Its leader, Mansour Abbas, made greater involvement of Arab citizens in Israeli politics a key election promise. The decision was described as "historic" by Israeli media.

End of political stalemate — but not just yet

A unity government between Netanyahu and his former rival Benny Gantz (Blue and White) was short-lived, and new elections were called in March. "It isn't over, but yesterday Yair Lapid and Naftali Bennett took a big step on the way to forming the alternative government that they have been trying to form in the last few weeks," wrote Yuval Karni in the daily Yedioth Ahronoth.

The new coalition deal still needs to be voted on in the Knesset within the next weeks before the government can be sworn in. Analysts believe there will be a lot of pressure on some right-wing lawmakers — already taunted as "traitors" — to abandon ship, as the coalition has a razor-thin majority of 61 seats out of 120 Knesset seats.

Among the public, the mood is mixed.

"Finally, it's done that Bibi will go. It doesn't matter if it is a good or bad prime minister; it is not healthy that somebody will be in control for such a long time," said student Avia Farrah Hadal in Jerusalem on Wednesday. "It corrupts people, we need a change, we need new people and maybe this will lead to change." 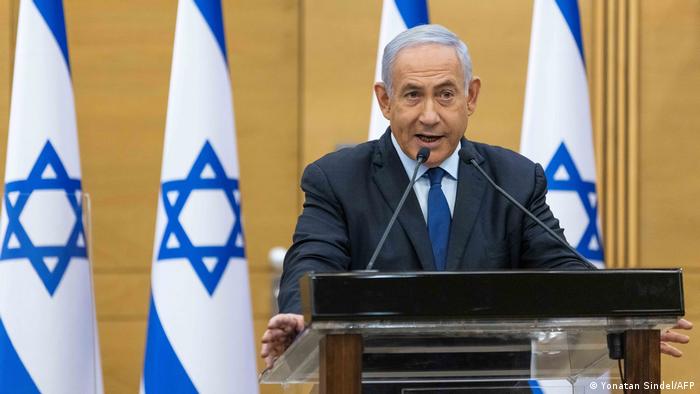 Another passerby would have preferred a different outcome. "I feel 'sorry' for the new government; it's more about being anti-Bibi than it is a unity government. I am for unity but not unity like this," says Ori Fridlich, also on his way to his studies. "I think change should have arrived one day, but I am for Bibi to remain; he was the best that we had for the state of Israel."

Yair Lapid, leader of the second-largest and centrist party Yesh Atid, was the architect of this broad coalition. He will share the premiership with Naftali Bennett, the leader of the far-right national-religious party Yamina. Bennett will head the government in the first two years, followed by Lapid for the second two years. "At the end of this week, we can be in a new era with a different prime minister," said Yair Lapid on Monday.

The coalition will be one of the widest-ranging governments in Israel's history, and lawmakers will have to overcome their ideological differences to work together. It will comprise the center-left Labor party with its leader Merav Michaeli and the left-wing Meretz party, but also the hawkish new New Hope party of former Netanyahu ally Gideon Saar, and Israel Beitenu, the hardline secular party of Avigdor Liberman. Analysts believe it will mainly focus on economics, the state budget and social issues and will spare itself from dealing with the most controversial issue such as policy on Palestinian affairs — at least for now. But there are many other issues, from LGBTQ rights to religious issues, that the parties do not agree on. That is why some observers wonder how long the coalition will remain cohesive.

Seen as the kingmaker, Naftali Bennett had left his options open regarding whether he would join a government formed by Netanyahu or a "change coalition" formed by Yair Lapid. The eventual power-sharing agreement between Lapid and Bennet has been controversial, as Bennett's party, Yamina, has only seven seats out of the 120 Knesset seats, and only six of those elected parliamentarians support this government. 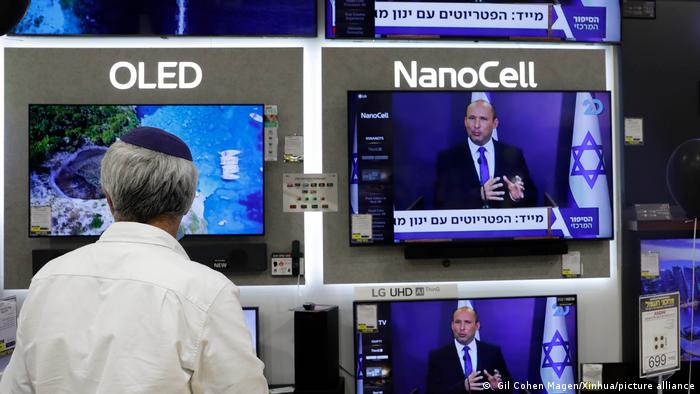 The mood is mixed among many Israeli's, with some preferring the status quo

The 49-year old Bennett is a former tech entrepreneur who entered politics over a decade ago. For many years, he was a close aide to Benjamin Netanyahu and the head of the "Yesha" settler council. Bennett is outspoken in his opposition to a sovereign Palestinian state and has advocated for the annexation of parts of the occupied West Bank. Analysts question whether the hard-liner would translate those ideological views into policy in a mixed government.

End of the Netanyahu era?

Prime Minister Benjamin Netanyahu and his right-wing (conservative) Likud party are the greatest losers in this arrangement. After 12 years, he will have to leave the prime minister's residence on Balfour Street, which has seen numerous demonstrations aimed at ousting him over the course of last year. Netanyahu is also standing trial for corruption charges in court. As prime minister, he was not obliged by law to step down over his indictment. Likewise, the ultra-orthodox parties that were his closest allies will be out of power for the first time in years — unless they decide to join the new government at some point.

As the deal between Lapid and Bennett drew closer, Netanyahu reacted with ever more outrage in recent days. He accused his former protégé Bennett of being "the fraud of the century" after Bennett announced his intention to join Lapid's efforts to build a "change government" on Sunday. Netanyahu also warned that this government will hamper Israel's deterrence. "How will we look in the eyes of our enemies? What will they do in Iran or Gaza? What will they say in the corridors of the administration in Washington? This government will stand against Iran? This government supports the dangerous nuclear deal," said Netanyahu.

However, the premier's focus could now turn to potential initiatives within his own party to oust him as leader of the Likud. Some senior figures may want to call early primaries to challenge its long-term leader, who could soon find himself on the opposition bench.