Prosecutors have laid out their case in a wide-ranging corruption trial against Israeli Prime Minister Benjamin Netanyahu, who accused them of persecuting him in an attempt to undermine the will of the voters. 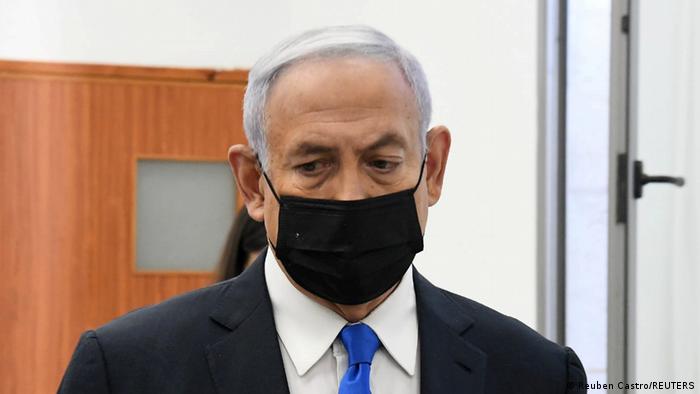 In this picture from February 8, Israeli Prime Minister Benjamin Netanyahu arrives in court for a hearing in his corruption trial

Israeli Prime Minister Benjamin Netanyahu accused public prosecutors of staging a "coup attempt" against him in a speech given after his corruption trial resumed on Monday.

The 71-year-old again said that a "witch hunt" was underway against him.

The trial in Jerusalem began hearing witness testimony in the evidentiary phase of the corruption trial against him.

All eyes were on lead prosecutor Liat Ben-Ari, who delivered a much-anticipated opening statement at the Jerusalem District Court.

She said Netanyahu "abused his power to give illegal benefits in coordination with central media outlets to further his personal interests," according to the Jerusalem Post.

Following her statement, the first witnesses testified, including Ilan Yeshua — the former CEO of the news site Walla and a key witness in the first case of three cases to be heard.

Yeshua said he had received instructions from Netanyahu's allies to post articles favorable to the prime minister and information that smeared his rivals.

"It was clear that we were a website that did what the prime minister's office asked us," Yeshua told the court.

Netanyahu's trial has been delayed several times because of coronavirus-related restrictions and last month's general election.

What is Benjamin Netanyahu accused of?

Netanyahu is charged with accepting bribes, fraud and breach of trust in three cases.

Netanyahu has denied all charges against him, branding them a "witch-hunt" by his political opponents, media and law enforcement.

Netanyahu is expected to remain in his post for the duration of the trial, as there is currently no legal barrier to him staying in office as prime minister.

Even if convicted, Netanyahu would not be required to step down until the appeals process is exhausted — which could take years.

While the prosecution called the cases "one of the gravest in Israel's history," a similar case could be a blueprint for the future. Ehud Olmert, former Israeli prime minister, stepped down as his party's leader when he was under investigation for corruption in 2008. However, he technically remained in office until the following elections — the same that brought Netanyahu to power.

Olmert was later convicted of bribery, fraud, obstruction of justice and breach of trust and served 16 months of a 27-month prison sentence.

Israel will head to the polls again in March after parliament failed to meet a deadline to pass the budget. It will be the fourth election in two years.