Naftali Bennett was warmly welcomed in Bahrain in the highest-level talks between the two countries since diplomatic relations were established in 2020. 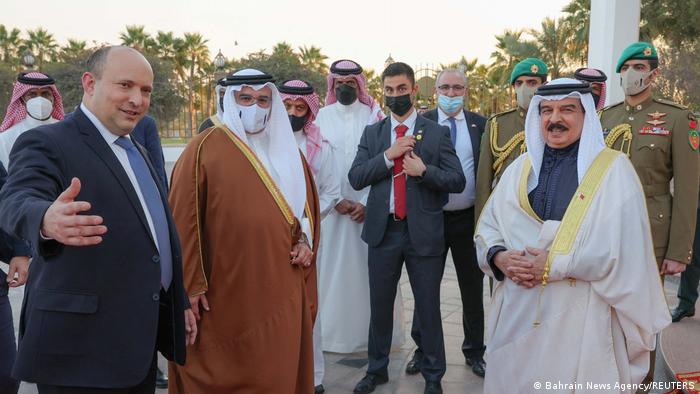 Israel's Prime Minister Naftali Bennett wrapped up a 24-hour trip to Bahrain on Tuesday in what is the highest-level visit between the countries since formally establishing diplomatic relations in 2020.

Israel building a 'ring of stability'

Bennett said he came "with a spirit of goodwill, of cooperation, of standing together against mutual challenges."

Bennett also said Israel was building a "ring of stability" by forming a "new regional architecture of moderate countries."

The Israeli prime minister posted a clip of his meeting with the crown prince, during which the national anthem of Israel was played.

"The Anthem of Hope "Hatikvah" at the Palace of the Crown Prince of Bahrain. A very touching and historic moment. Thank you all!

Bennett landed in the Bahraini capital, Manama, on Monday, and was met with an honor guard and Bahrain's foreign minister, Abdullatif al-Zayani.

The two nations established diplomatic relations in 2020 as part of the US-backed Abraham Accords.

Bennett's visit occurs against the backdrop of stalled efforts to revive the Iranian nuclear deal. Prior to the formal establishment of diplomatic relations, there was covert security cooperation between Israel, Bahrain and the UAE, mostly targeting Iran.

Why is Bennett's visit to Bahrain significant?

On February 2, Israel's Defense Minister Benny Gantz visited Manama. Gantz announced Israel would be sending a military officer as part of an international coalition based in Bahrain.

Israel has offered other forms of defense cooperation but has not specified what form that could take.

Bahrain is home to the US Navy's Fifth Fleet.

Ahead of Bennett's visit, there were some protests in Shia villages, with images and videos posted to a banned opposition group's social media accounts.

Bahrain's monarchy is Sunni and its outreach to Israel has been criticized by the country's Shia majority population.

Israel also normalized relations with the UAE in 2020, along with Sudan and Morocco.

Israel's Prime Minister Naftali Bennett was warmly welcomed in Bahrain in the highest-level talks between the two countries since diplomatic relations were established in 2020.