Israeli Arab lawmaker Zouheir Bahloul's resignation from the Knesset is the latest fallout from the nation-state law. Critics in Israel and abroad have called the law racist and a threat to democracy. 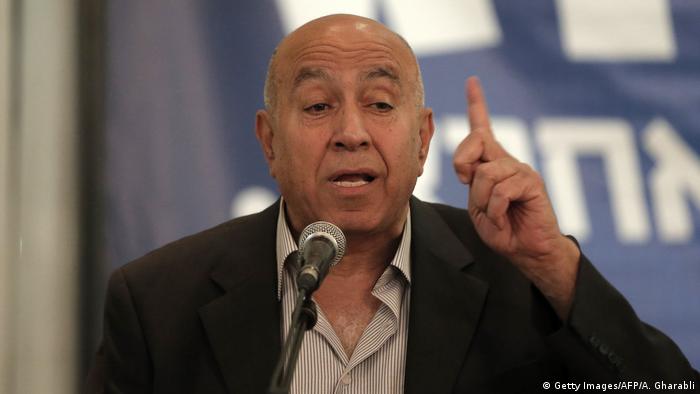 A prominent Israeli Arab lawmaker resigned Saturday from what he described as a "racist" and "extremist" parliament that passed a controversial law declaring Israel to be the nation-state of the Jews.

The law passed in the Knesset earlier this month states that "national self-determination in the State of Israel is unique to the Jewish people."  It also downgrades Arabic from an official language alongside Hebrew.

Zouheir Bahloul, of the main opposition Zionist Union alliance, said he was resigning over a "dangerous" law that undermines the democratic nature of the Israeli state.

"The nation state law officially, constitutionally, removes the Arab population from the path of equality in Israel," he said in Hebrew on the television show Meet the Press.

"Should I sit on the fence? Should I give legitimacy to this destructive, racist, extremist parliament?"

"This is a painful moment. If I'm giving up, it means all hope is lost," the Arab lawmaker continued.

Bahloul is considered a moderate political voice who sought understanding and equality between Jews and Arabs. He is a member of the Labor Party, which along side Hatnuah make up the center-left Zionist Union alliance.

Incoming opposition leader and head of Hatnuah, Tzipi Livni, said in comments translated by Ynet News that she regretted Bahloul's decision, "particularly in days in which the tyranny of the majority and extremist nationalism are hurting minorities in society. This is the time for all of those who believe in the State of Israel being both Jewish and democratic—with equality for all—to join forces."

Labor Party said in a statement that it lamented Bahloul's exit from the Knesset and vowed to fight the nation-state law.

"The nation-state law is a kick in the head of more than a fifth of Israel's population, which would be a Jewish state with or without it. When we return to power we will amend this law as well, and add to it what is supposed to be obvious, the word 'equality.'"

The nation-state law enters Israel's Basic Law, a quasi-constitution. It has drawn widespread criticism from the main opposition, Israeli Arab lawmakers with the Joint List, the international community and liberal Jewish groups abroad.

The 150,000 strong Druze community has come out strongly against the nation-state bill and the absence of references to equality. Unlike Muslims and Christians, Druze are drafted into the military and considered in alliance with Jews.

Druze lawmakers and community leaders have filed a challenge to the nation-state law with the Supreme Court.

Thousands of Israelis have taken to the streets to protest a law that denies men access to surrogate mothers. Demonstrators were especially angry with Prime Minister Benjamin Netanyahu, who had once promised his support. (22.07.2018)

After a Palestinian youth stabbed three Israelis in a West Bank settlement, Israeli Defense Minister Avigdor Lieberman announced 400 more Jewish homes would be built as an answer to the attack. (27.07.2018)