Among other things, the law states only Jews have the right to self-determination, it "encourages" Jewish settlement and downgrades the status of the Arabic language. Critics say it is racist and threatens democracy.

Khan al-Ahmar to be razed

Israel's parliament passed a controversial law early Thursday that declares only Jews have a right to national self-determination in Israel, drawing criticism from human rights organizations and Arabs who called it racist and said it amounted to apartheid.

The "nation-state" law, backed by the right-wing government, passed 62-55 with two abstentions in the 120-seat Knesset after months of political debate and after some parts were softened over concerns it would damage Israel's international image.

The bill states that "Israel is the historic homeland of the Jewish people" and "the right to exercise national self-determination in the State of Israel is unique to the Jewish people." It also downgrades Arabic from an official language alongside Hebrew to a "special" one, and declares Jerusalem the united capital of Israel.

The law also instructs the state to preserve the Jewish heritage within the diaspora, and contains passages about national holidays, the flag, the anthem and making the Hebrew calendar the official calendar. 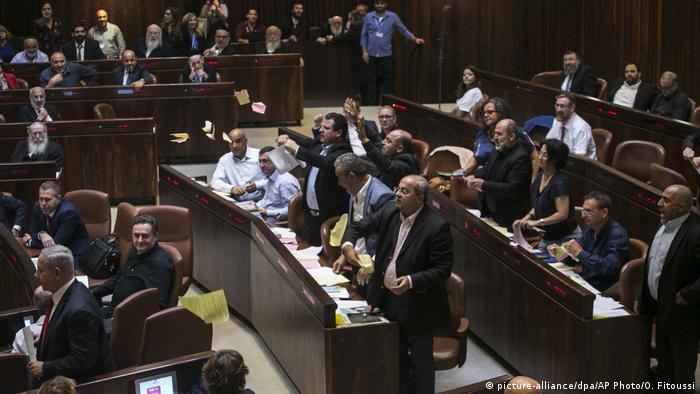 Arab Israeli MPs stood up in the Knesset, protesting the law

The measure enters Israel's Basic Law, which is similar to a constitution.

"Israel is the nation-state of the Jewish people that respects the individual rights of all its citizens. This is our state — the Jewish state," he said.

Last week, Netanyahu vowed to ensure all civil rights were protected, but said "the majority also has rights and the majority decides."

On paper, Israeli Arabs – who are mainly Palestinians – have full rights unlike Palestinians in the occupied territories, but they often complain of discrimination in housing, employment, education and services.

After the vote, Arab lawmakers tore up what they called an "apartheid law, a racist law."

They were subsequently thrown out of the Knesset plenum hall, Israeli daily Haaretz reported.

Ahmed Tibi, an Israeli-Arab lawmaker with the Joint List, an alliance of Arab parties and the third-largest faction in the Knesset, told reporters: "I announce with shock and sorrow the death of democracy."

Ayman Odeh, the head of the Joint List, wrote on Twitter that the "tyranny" of the majority had squashed the rights of the minority.

"Separation, discrimination, supremacy and racism have now been enshrined into the Basic Law," he wrote, calling on Jewish and Arab democrats to unite against nationalism and racism.

Isaac Herzog, the head of the main opposition Zionist List political alliance, said in parliament that history will determine whether the law harms or benefits Israel.

"I really hope that we won't find the fine balance between a Jewish and democratic state to be hurt," he said.

"By defining sovereignty and democratic self-rule as belonging solely to the Jewish people – wherever they live around the world – Israel has made discrimination a constitutional value and has professed its commitment to favoring Jewish supremacy as the bedrock of its institutions," Adalah General Director Hassan Jabareen said in a statement following the vote.

Liberal-leaning US Jewish groups that have lobbied against the nation-state bill were quick to condemn it.

"This is a sad and unnecessary day for Israeli democracy," said Rabbi Rick Jacobs, the president of the Union for Reform Judaism. "The damage that will be done by this new nation-State law to the legitimacy of the Zionist vision and to the values of the state of Israel as a democratic—and Jewish—nation is enormous."

Daniel Sokatch, the head of the New Israel Fund, described the law as "tribalism at its worst" and a betrayal of Jewish and democratic values that creates first- and second-class citizens.

The European Union also expressed concern over the controversial legislation, including the possibility of it hindering the peace process.

"We are concerned, we have expressed these concerns and we will continue to engage with the Israeli authorities in this context," said Maja Kocijancic, the spokeswoman for EU foreign policy chief Federica Mogherini.

When asked if the law would pose an obstacle to the Israeli-Palestinian peace process, Kocijancic said it "can certainly further complicate the path towards a two-state solution."

The controversial bill underwent a number of last-minute changes to soften language following political disputes and objections, including from Israel's president and attorney-general.

One section that was dropped would have instructed courts to rule according to Jewish ritual law when there were no legal precedents.

Another section would have enshrined in law the establishment of communities of the "same faith and nationality," potentially opening the way for segregated communities and discrimination against homosexuals.

President Reuven Rivlin blasted the openly discriminatory measure earlier this month, saying it "could harm Jews throughout the world and the State of Israel."

Instead, the law that passed on Thursday says that the Israeli state views "the development of Jewish settlements as a national value and will act to encourage and promote its establishment."

Settlements in the occupied West Bank are viewed as illegal under international law and a major impediment to a viable Palestinian state in the future.

Opinion: The Nelson Mandela in us all

Nelson Mandela would have turned 100 today, and political copycats are falling over themselves to add a bit of his luster to their own bespoke suits. But Claus Stäcker asks, What role does Mandela have in society today? (18.07.2018)

Award-winning filmmaker Samuel Maoz shares with DW the personal story behind his latest film, Foxtrot, and why his allegory of Israeli society made him an enemy to many in his home country. (26.06.2018)

The Israeli government has urged the European Union to halt funding to non-governmental organizations that promote boycotts against the Jewish state. Israel has come under criticism for its treatment of the Palestinians. (25.05.2018)