Israel vows to work with US on any new Iran deal

The US will ensure Israel's "military edge" in the Middle East, Pentagon chief Lloyd Austin said during his first visit to Israel. Separately, Iran reported that its Natanz nuclear facility has lost power. 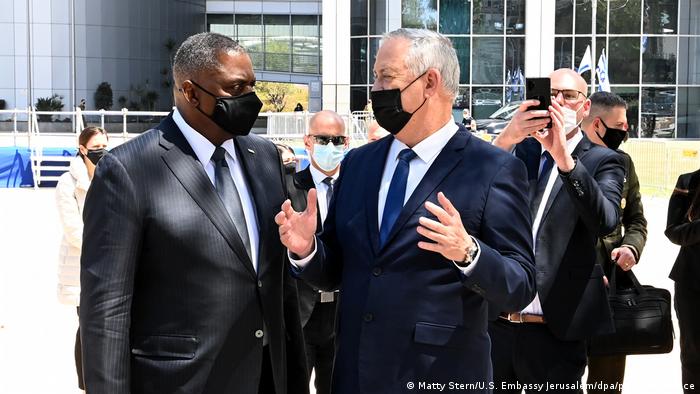 On Sunday, Israel's defense minister vowed to cooperate with the US on matters related to Iran, saying he views Washington as a "full partner" and that he will ensure that any new diplomatic agreement with Tehran does not compromise regional security.

"The Tehran of today poses a strategic threat to international security, to the entire Middle East and to the state of Israel," Benny Gantz  told US Defense Secretary Lloyd Austin during his first visit to Israel.

The United States recently resumed talks, albeit indirect and inconclusive, about the US's possible return to the 2015 Iran deal with other major world powers, prompting fears throughout the Israeli government. The Trump administration had withdrawn from the deal.

"We will work closely with our American allies to ensure that any new agreement with Iran will secure the vital interests of the world and the United States, prevent a dangerous arms race in our region," Gantz said.

During his two-day visit, Austin said Washington considered the US-Israel alliance central to regional security but did not make public remarks on Iran specifically.

Austin said the United States would ensure Israel's "qualitative military edge" in the Middle East as part of a "strong commitment to Israel and the Israeli people."

"During our meeting I reaffirmed to Minister Gantz our commitment to Israel is enduring and it is ironclad," Austin said.

The defense minister is also scheduled to meet with Prime Minister Benjamin Netanyahu, who considers Iran to be Israel's most dangerous enemy.

Netanyahu's government has called the deal a temporary cap on Iran's nuclear activities, but alleged that the country says would reach weapons-grade levels in the long run. Tehran has argued that it has no intent of developing nuclear weapons.

US arms deliveries to Israel are also expected to be discussed during Austin's visit.

Several media reports hinted that the blackout had been caused by an Israeli cyberattack.

Initially, Iranian authorities declined to comment on the causes of the incident. Later on Sunday, however, they described the incident as an act of "anti-nuclear terrorism."

Ali Akbar Salehi, the head of the Atomic Energy Organization of Iran, called on the the International Atomic Energy Agency to confront the sabotage, but did not point to any countries or groups as responsible for the blackout.

"To thwart the goals of this terrorist movement, the Islamic Republic of Iran will continue to seriously improve nuclear technology on the one hand and to lift oppressive sanctions on the other hand," Salehi said, according to state TV.

In 2010, Iran suffered serious damage to its nuclear capacities in Natanz following an apparent cyberattack. Multiple media reports implicated the US and Israel.