Israel says it will exercise right to self-defense after Hezbollah skirmish | News | DW | 28.01.2015

Tel Aviv has said it will take all measures to protect itself after an exchange of fire with Lebanon's Hezbollah. Two Israeli soldiers and a UN peacekeeper from Spain were killed in the attacks. 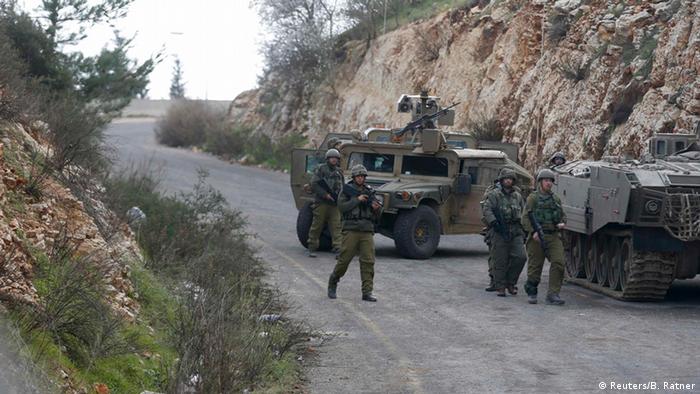 Israel told the United Nations Security Council on Wednesday that it would exercise the right to self-defense following a Hezbollah attack in which two Israeli soldiers were killed.

"Israel will not stand by as Hezbollah targets Israelis," Israel's UN Ambassador Ron Prosor wrote to the Security Council in a letter, also addressed to UN Secretary General Ban Ki-moon.

"Israel will not accept any attacks on its territory and it will exercise its right to self-defense and take all necessary measures to protect its population," Prosor added.

Tel Aviv's ambassador also warned of a full-blown conflict, demanding that Hezbollah be disarmed according to the Security Council resolution 1701, which halted the 2006 Israel-Lebanon war in southern Lebanon - a Hezbollah stronghold.

Retaliation for Israel strikes in Syria

Earlier on Wednesday, Hezbollah fighters fired missiles, hitting an Israeli military convoy and killing two soldiers and wounding seven more. The attack, carried out by a group called the "righteous martyrs of Quneitra," was an apparent retaliation for a deadly airstrike in Syria earlier this month in which six Hezbollah fighters were killed.

The UN's international mission said the precise cause of the peacekeeper's death was "as yet undetermined" and urged all sides to show "maximum restraint to prevent an escalation."

While Hezbollah took credit for "several casualties in the enemy's ranks," Israeli Prime Minister Benjamin Netanyahu warned that the army was "ready to act with force on any front."

"This is not necessarily the last response," Army spokesman Brigadier General Moti Almoz wrote on Twitter.

Israel and Hezbollah fought a bloody war in 2006 in which 160 Israelis, mostly soldiers, and 1,200 Lebanese and were killed. Israeli occupied parts of Lebanon for 22 years until 2000 and the neighbors are technically still at war with each other.

Hezbollah has claimed to be behind a roadside bombing attack that injured two Israeli soldiers. The attack is the second in three days to occur in a border region that had remained largely quiet since 2006. (07.10.2014)