Religious and political leaders branded the march in the central city of Kalisz a vehicle for hate that did not add to the patriotism of the celebration. Israel called for its organizers to be brought to justice. 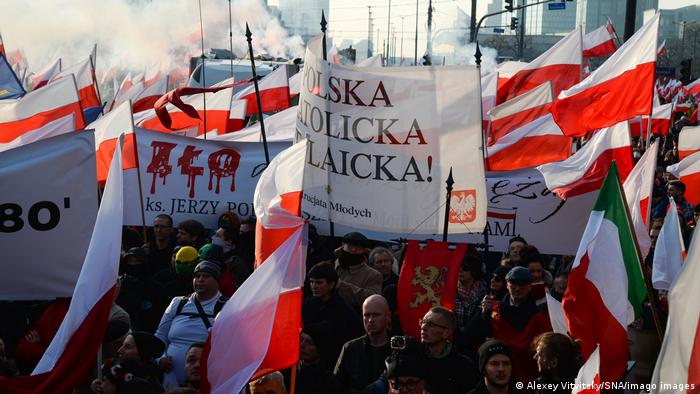 The Israeli and Polish governments on Saturday condemned the chanting of antisemitic slogans at a far-right march marking Poland's Independence Day this week.

Hundreds of protesters shouted "Death to Jews" at the march in the central city of Kalisz on Thursday, local media reported, drawing condemnation from inside and outside the country.

What happened at the march?

The participants of the march referred to LGBTQ people and "Zionists" as "enemies of Poland" that needed to be expelled from the country.

They burned a copy of a medieval document dating back to 1264 that gave Jews protection and rights and led to a flourishing 3.3-million-strong community before Nazi Germany wiped it out.

A much larger national day march of thousands in the Polish capital, Warsaw, also featured antisemitic slogans. They also protested against the EU, which has clamped down on a Polish court decision that has angered Brussels.

The city's liberal mayor Rafal Trzaskowski had tried to ban the march, saying the city was no place for "fascist slogans," even getting a court to rule for the ban.

But the Polish government overruled his authority, declaring it a national ceremony. It comes as the nation's ruling Law and Justice (PiS) party has curried favor with extremist groups in recent years.

How have influential leaders reacted?

Polish Interior Minister Mariusz Kaminski said Saturday that "the people who organized the shameful and scandalous assembly in Kalisz on November 11 will suffer legal consequences."

Israeli Foreign Minister Yair Lapid welcomed the "unequivocal condemnation" by Polish authorities. He said Jewish people "expect the Polish government to act uncompromisingly against those who took part in this shocking display of hate."

"The horrific antisemitic incident in Poland reminds every Jew in the world of the strength of hatred that exists in the world," Lapid added.

The Roman Catholic Church in Kalisz and the rest of the country joined in its condemnation of the antisemitic march.

Bishop Rafal Markowski, chairman of the Committee for Dialogue with Judaism of the Polish Bishops' Conference, said that "such attitudes have nothing to do with patriotism."

"They undermine the dignity of our brethren and destroy social order and peace. They are in direct contradiction to the Gospel and the teaching of the Church,'' Markowski added.