As Palestinians and Israelis survey the damage of 11 days of war, US President Joe Biden has called for a two-state solution, saying "it is the only answer" to peace in the Middle East region.

DW's Tania Krämer on tensions and aid situation in Gaza

A cease-fire between Israeli and Palestinian militant groups appeared to be holding as humanitarian aid made its way into the Gaza Strip on Saturday.

US President Joe Biden has pledged to help organize efforts to rebuild Gaza.

Speaking from the White House on Friday, Biden promised a "major" aid package for the Palestinian Authority, the Western-backed group that administers parts of the Israeli-occupied West Bank, to ensure the Islamic militant group Hamas was not able to restock its military arsenal.

Buildings in the Gaza Strip were hit by a succession of Israeli airstrikes and missiles, launched in response to Hamas-fired rockets, during 11 days of deadly fighting.

Biden spoke as an Egypt-brokered truce between the Hamas militants and Israel a day earlier appeared to hold on Friday.

Amid the ceasefire, tens of thousands of residents of the Gaza Strip ventured out on Friday for the first time in days.

They checked on neighbors, examined damaged buildings, visited the sea and buried the dead.

In total, Israeli airstrikes killed 248 people, including 66 children, since May 10, and wounded 1,948 others, the Hamas-controlled health ministry has said. Fighters were also among those killed.

In Israel, 12 people were killed, including one child.

Rescuers in Gaza said they were working with meager resources to help any survivors under the rubble.

Life returned to normal for many Israelis on Friday. But clashes broke out in the city of Jerusalem. 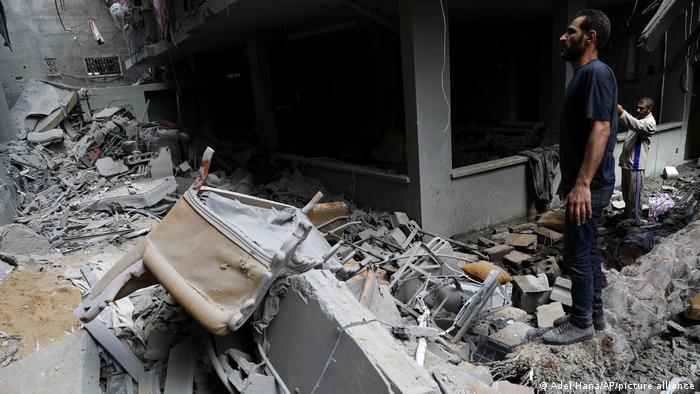 Israeli police cracked down on stone-throwing protesters at the Al-Aqsa Mosque compound. Clashes at the holy site two weeks earlier were partially responsible for the recent escalation.

There were further conflicts in several other parts of Israeli-occupied east Jerusalem, and at the crossing point between Jerusalem and the West Bank, Israeli police said. Amid the unrest, Biden on Friday said he had told the Israelis to stop "intercommunal fighting" in the city.

What's next in the Israel-Palestinian conflict?

Biden used the cease-fire as an opportunity to call for "a two-state solution," saying: "It is the only answer."

However, he stressed, "there is no shift in my commitment to the security of Israel." He added that until the region "unequivocally" acknowledges Israel's existence "there will be no peace."

The two-state solution — with a sovereign Palestinian state alongside Israel — has been the cornerstone of decades of international diplomacy aimed at ending the Israeli-Palestinian conflict.

But US policy under former President Donald Trump was criticized as being blatantly pro-Israel and ignoring the Palestinians.

Biden added that he was "praying" the cease-fire would hold.

DW's Tania Krämer on tensions and aid situation in Gaza