Egypt's foreign minister has met Israeli Prime Minister Benjamin Netanyahu to discuss restarting peace efforts with the Palestinians. The first such trip in a decade, it could herald the start of stronger bilateral ties. 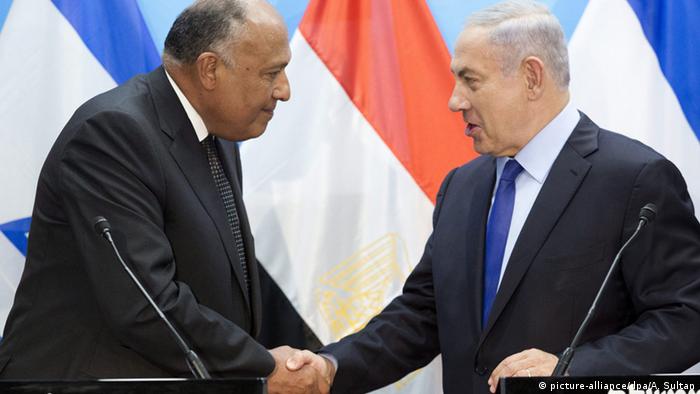 Before the meeting in Jerusalem on Sunday, Egyptian Foreign Minister Sameh Shoukry said the Middle East was at a "crucial and challenging juncture," adding that resolving the Israeli-Palestinian conflict would have a "far-reaching and dramatic and positive impact on the overall conditions of the Middle East region. Egypt remains ready to contribute toward achieving this goal."

Egypt remains a "steadfast and unwavering" supporter of the two-state solution to the Israeli-Palestinian conflict," Shoukry added.

"It is no longer acceptable to claim that the status quo is the most we can achieve," Shoukry said in Jerusalem.

The talks could indicate a thawing in Israel's foreign policy in the region, after overtures to Turkey in June.

Escalating violence in Palestine is also a likely factor in restarting talks. Violence since October has killed at least 214 Palestinians, 34 Israelis, two Americans, an Eritrean and a Sudanese national.

Netanyahu welcomed Egyptian President Abdel-Fattah el-Sissi's "recent offer of Egyptian leadership and efforts to advance peace with the Palestinians and a broader peace in our region" and called on Palestinians to engage in direct negotiations.

Egypt's Foreign Ministry said Shoukry and Netanyahu would discuss "laying the foundation and specifics of confidence-building between Palestinians and Israelis to create a supportive environment to resume direct negotiations between them with the aim of reaching a comprehensive and just solution."

The trip is also reportedly intended to prepare the ground for a visit by Netanyahu to Cairo, according to Israeli public radio.

The two countries have cooperated in other areas, particularly with regard to jihadis in Egypt's Sinai Peninsula. In April, the Israeli military's deputy chief of staff spoke of an "unprecedented level of cooperation" with Egypt, mainly regarding intelligence.

Egypt has opened its border with Gaza for the first time in three months. The bitter squabbles between Cairo and Hamas, which rules the Gaza Strip, have been put on hold for two days. (11.05.2016)

Israel's right-wing government has authorized a special aid package for Jewish West Bank settlements. The decision has been attacked by the opposition for undermining Israel's security and international standing. (19.06.2016)