Egypt has opened its border with Gaza for the first time in three months. The bitter squabbles between Cairo and Hamas, which rules the Gaza Strip, have been put on hold for two days. 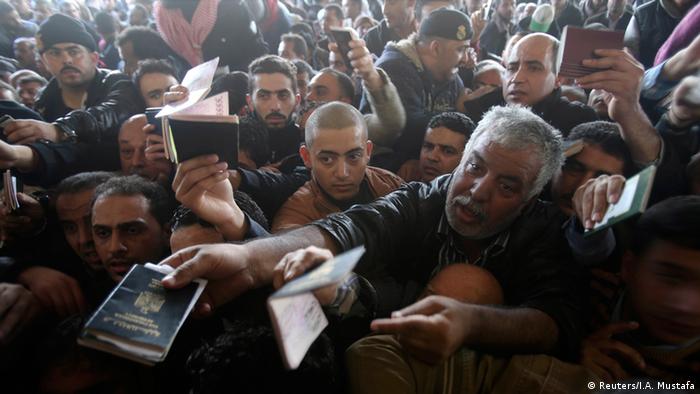 Egypt reopened the Rafah crossing - Gaza's main gateway to the outside world - for 48 hours beginning on Wednesday. About 30,000 Gazans are on a waiting list to cross at Rafah, but only a small minority of them are reportedly likely to be able to cross during this brief opening.

The Palestinian Embassy in Cairo said Rafah had been opened at the request of West Bank-based Palestinian President Mahmoud Abbas, who had a meeting with Egyptian leader Abdel-Fattah el-Sissi earlier this week.

An open and shut case

The 1.9 million Palestinians living in the enclave have suffered economically from the Egyptian blockade imposed after Cairo became concerned the Hamas adminstration was using the crossing to bolster Islamist forces in the enclave.

The military-backed government in Cairo has kept the border with the Gaza Strip mostly closed since Mohammed Morsi, head of the Muslim Brotherhood, was removed as president in 2013.

Egypt accuses Hamas in Gaza of supporting an Islamist insurgency in the Sinai Peninsula that borders the Palestinian territory, a claim Hamas denies, although they boosted security forces along the border with Egypt.

Israel said recently it will also reopen a second border point for commercial traffic into Gaza, seen as a possible step towards easing the blockade it imposed in 2007.

Israel and Hamas fighters have clashed in southern Gaza in the most serious incidents since a devastating war in 2014. Israel's army has said it found another cross-border tunnel used by Palestinian militants. (05.05.2016)