An Israeli government minister has confirmed that Prime Minister Benjamin Netanyahu met with the Saudi crown prince and US secretary of state. But Saudi officials have strongly denied reports that a meeting took place. 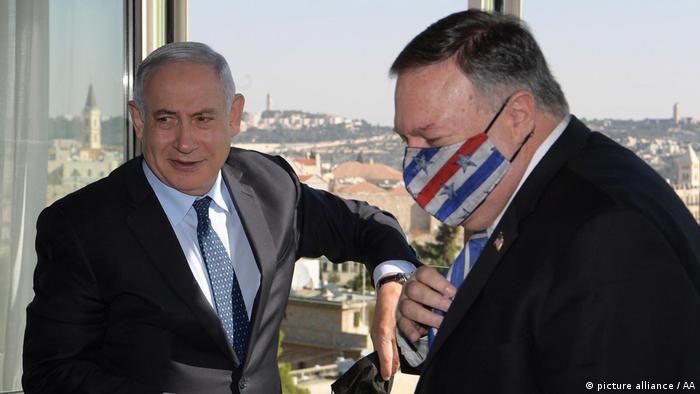 Education Minister Yoav Gallant called the visit "an amazing achievement" after Israeli media reported that Netanyahu had met with Crown Prince Mohammed bin Salman and US Secretary of State Mike Pompeo in Neom, where the crown prince was meeting with Pompeo.

"The very fact the meeting happened, and was outed publicly, even if half-officially right now, is a matter of great importance," Gallant, a member of the prime minister's Cabinet, said in an interview with Israeli army radio on Monday.

When asked about the reports, Netanyahu said: "I never commented on those issues and I will not start now. I'll just say that I am working on broadening the circle of peace."

"No such meeting occurred. The only officials present were American and Saudi," Saudi Foreign Minister Prince Faisal bin Farhan tweeted.

Trita Parsi, executive vice president of the Quincy Institute for Responsible Statecraft told DW: "It is quite predictable that the Saudis would deny it, particularly mindful of the tensions exit within the royal family as to whether there is wisdom in such a move."

King Salman is understood to be in favour of sticking to the Arab League's long-standing position that they would only recognise Israel only the Palestinians have an independent state, while the crown prince is more open to warmer relations with the Jewish state.

"From Netanyahu's perspective, to be able to show that the major Arab powers no longer have a problem with the Israeli occupation of Palestinian territory is something that vindicates his strategy," Parsi said.

Israel and Saudi Arabia currently have no diplomatic ties. Riyadh has said in the past in it will only recognize Israel once the Palestinians have an independent state.

A Gulfstream IV private jet took off just after 1740 GMT from Ben-Gurion International Airport near Tel Aviv, according to data from website FlightRadar24.com.

The flight traveled south along the eastern edge of the Sinai Peninsula before turning toward Neom and landing just after 1830 GMT, according to the data. The flight took off from Neom at around 2150 GMT and followed the same route back to Tel Aviv.

The US secretary of state traveled with an American press pool on his trip throughout the Mideast, but left them at the Neom airport when he went into his visit with the crown prince.

David Khalfa, a senior research fellow at the Center for Peace Communications in New York, told DW that, if confirmed, the visit looks like "another spectacular step has been taken in the direction of Arab-Israel normalization."

Khalfa said the talks were a clear attempt "to coordinate Israeli-Saudi strategy in face of Iran's hegemonic aims with the prospect of a new US administration that plans to return to the nuclear deal."

The Trump administration has helped broker peace deals between Israel and Saudi Arabia's neighbors, the United Arab Emirates and Bahrain. The normalization of ties has been largely on shared concerns about Iran.

Israelis — mostly Muslims going on pilgrimage — have been traveling to Saudi Arabia for years. But they usually do so with special permission or by using foreign passports.