The controversial move came after Israel finally won a legal battle against residents of Sur Baher. Israel says the buildings are a safety issue, but Palestinians argue that the government wants the land for settlements. 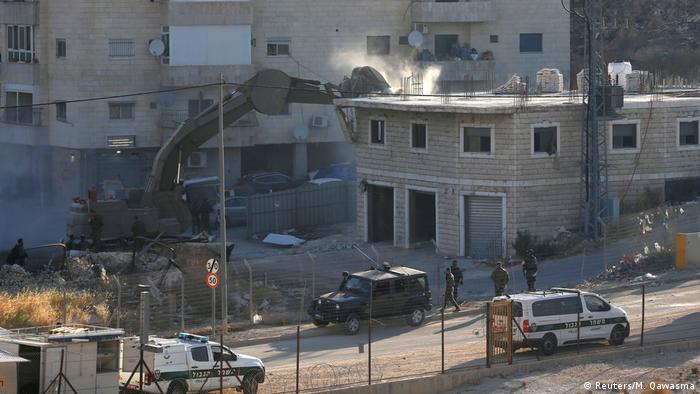 Israel began demolishing part of a Palestinian village on the outskirts of Jerusalem on Monday, despite strong international criticism and protests. Bulldozers and hundreds of soldiers started tearing down buildings in Sur Baher after forcing residents out.

Sur Baher straddles the city and the occupied West Bank, and Israel has long claimed that many of its buildings were constructed too close to its separation barrier between the city and the Palestinian territory.

After a legal battle lasting years, Israel's Supreme Court ruled in June that the structures did indeed violate a construction ban.

The French Foreign Ministry condemned the demolition, saying it sets a "dangerous precedent."

"These demolitions have taken place for the first time in an area controlled by the Palestinian Authority (PA) under the Oslo Accords," the ministry said. "They represent a dangerous precedent which poses a direct threat to the two-state solution."

The European Union condemned the demolition, saying it "undermines the viability of the two-state solution and the prospect for a lasting peace."

This is one of the biggest demolitions Israel has carried out of Palestinian buildings in many years.

An impossible journey? Journey back to Gaza

Palestinians have said that the government is using the issue of security as an excuse to force them further and further from the city, expand settlements, and build roads linking the new Israeli communities.

As dawn broke, workers were already destroying several houses while soldiers combed through other buildings in the area.

"Since 2 a.m. they have been evacuating people from their homes by force and they have started planting explosives in the homes they want to destroy," said community leader Hamada Hamada. The Palestinians had reportedly got permission to build from the Palestinian Authority, but Israeli lawmakers overruled that in the Supreme Court.

The UN said the demolition had displaced 20 people already, while 350 owners of properties undergoing construction were also to be dispossessed.

Israel has occupied parts of the West Bank and east Jerusalem, intended for the Palestinian population, since the Six-Day War in 1967.

In the early 2000s, it created a barrier between some of the Israeli and Palestinian parts of Jerusalem, a move the government says is why shootings and suicide attacks have decreased. Palestinians, however, call it an "apartheid wall."

A set of Israeli airstrikes in Gaza following rockets striking southern Israel threaten to unravel a ceasefire reached in May. Israel also cut off Palestinian fishing access to offshore waters. (14.06.2019)

Hamas has said that Israel must answer for the "criminal act." The Israel Defense Force has acknowledged the mistake. (11.07.2019)