Israel has blamed militant group Hamas for launching two rockets at Tel Aviv. Hamas has denied responsibility, but Israel has already launched retaliatory strikes on a Hamas naval base south of Gaza City. 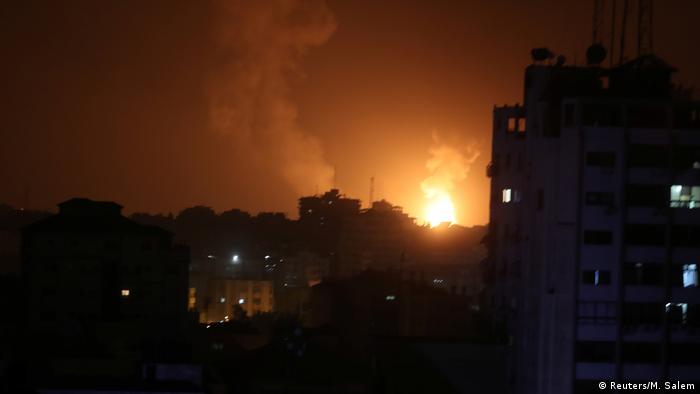 Israel's military has said two rockets were launched from the Gaza Strip to the Tel Aviv area on Thursday, in the first such attack there since the 2014 war in the Palestinian enclave.

The rockets triggered air raid sirens across the city, but no damage or injuries were reported.

But it marked the first time that Tel Aviv, some 80 kilometers (50 miles) north of Gaza, has been targeted by rocket fire since a 2014 war with Gaza militants.

The Israeli government later confirmed it had launched retaliatory strikes against "terror sites" in Gaza. Palestinian media said the target was a naval base controlled by Hamas.

Earlier, the Israeli military said while it did not know who had fired the initial rockets, it held Hamas responsible.

"We are still checking which group did the firing. We don't know who carried it out," chief military spokesman Brigadier-General Ronen Manelis told Israel Radio.

"The Hamas organization is the main organization in the [Gaza] Strip. It is responsible for what happens within the strip and what emanates from it," Manelis added.

Hamas has denied Israel's allegations amid talks with Egypt on Thursday aimed at achieving a long-term ceasefire with Israel.

The Hamas armed wing said in a statement it was "not responsible for the firing of the rockets tonight toward the enemy. They were fired as a meeting was underway between the leadership of the Hamas movement and the Egyptian security delegation over the understandings regarding the Gaza Strip."

Earlier this week, Israel struck Hamas targets in Gaza in response to rocket fire on southern Israel, near the border.

Gaza is also home to other militant groups including Salafists inspired by the "Islamic State" group, as well as Islamic Jihad, an Iranian-backed armed organization that also holds a formidable rocket arsenal. Islamic Jihad has also denied responsibility for Thursday's attack on Tel Aviv.

Earlier this week, Netanyahu issued a warning to Hamas, rejecting suggestions that Israel would be reluctant to take tough action in Gaza ahead of national elections in April.

"I suggest to Hamas, don't count on it," he told his cabinet. "We will do anything necessary to restore security and quiet to the area adjacent to the Gaza Strip and to the south in general."

US seeks Indonesia alliance against China maritime claims 13m ago