A trial of eight people accused of spreading Islamist propaganda over the Internet opened in Munich on Tuesday. Prosecutors say the defendents used Internet forums and blogs to call for a holy war. 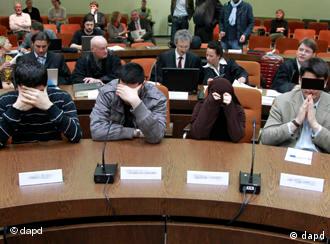 Seven of the defendants are German citizens, one is Turkish

Seven men and one woman are accused of inciting terrorism and releasing brutal videos of bombings and beheadings as part of the German section of a group known as the "Global Islamic Media Front."

According to the federal prosecutor, the suspects published German translations of Al-Qaeda propaganda material as well as their own material on the Internet between August 2006 and March 2008, in order to attract new members and support for terrorist organizations abroad.

The defendants are now all between 18 and 30 years old, but some of them were minors at the time. Most had never met before the trial, relying on the Internet to communicate from their homes across Germany.

Attorney for the defense Nicole Lehmbruck said that the prosecution was making an example out of the young people.

"The prosecution obviously wants to show that young people, too, are responsible for the content of what they post online," Lehmbruck said. "But we'll see how the trial develops." 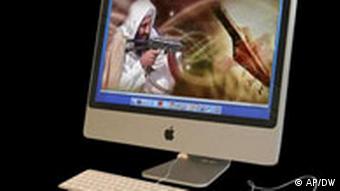 Even young people are accountable for what they post online

But the German prosecutor said he was disinclined to handle charges of inciting terrorism lightly, especially after a Muslim man suspected of having been radicalized shot two US airmen at Frankfurt airport last month.

"We see Islamist Internet propaganda as the most dangerous tool currently in the hands of Jihadi international terrorism," said prosecutor Michael Bruns, "and that's why we want to set a clear line in the sand."

The defendants face a maximum sentence of 15 years, but four have already confessed and may be sentenced separately.

The trial is set to run through May 19th.

French conservatives press on with Islam debate despite criticism

France's ruling conservative party is going ahead with a debate of the place of Islam in society, despite criticism that it's an attempt to pander to the right. Even the French prime minister is refusing to attend. (05.04.2011)

Muslim leaders have met with representatives from the German government at the third Islam Conference in Berlin. New Interior Minister Hans-Peter Friedrich is seeking to repair relations with the Muslim community. (30.03.2011)

Prosecutors believe the man charged with killing two US airmen and severely wounding two more at Frankfurt Airport was acting alone. An online video apparently motivated him to commit the crime. (04.03.2011)