Muslim leaders have met with representatives from the German government at the third Islam Conference in Berlin. New Interior Minister Hans-Peter Friedrich is seeking to repair relations with the Muslim community. 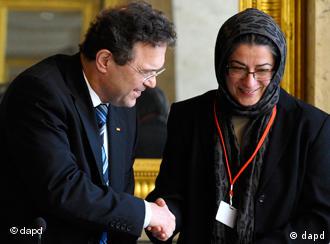 The German government has said it is looking for a "security partnership" with the Muslim population, as talks resumed at the third Islam Conference.

Newly appointed Interior Minister Hans-Peter Friedrich told the gathering of Muslim leaders in Berlin that he wanted to "work together on preventing radicalization and extremism."

The minister was under pressure to repair ties with Germany's Muslim population, following comments made on his first day in office. He said in early March that, historically, Islam was not a part of German society.

Before the meeting on Tuesday morning, Friedrich defended his earlier statements telling public broadcaster ARD: "The character of our country, our culture through the centuries, our value system is Christian and occidental."

But he said Muslims were "obviously" a part of society today and appealed for them to fully integrate into German life.

However this did not go far enough to satisfy all the Muslim participants at the meeting. 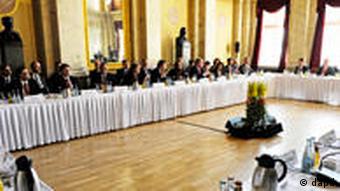 The conference has been criticized for being just a talking shop

"If you argue Muslims belong to Germany but not their religion, you throw the door wide open for Islamophobia," said Bekir Alboga from the DITIB federation of mosques.

The integration spokesperson for the opposition Social Democrats, Aydan Özoguz, somewhat controversially suggested Muslims should boycott the Islam Conference over Friedrich's comments, which she said served only to raise his political profile as a hardliner.

Friedrich's comments had divided Muslim communities in Germany rather than won them over, Özoguz told the Wednesday edition of the Hamburger Abendblatt daily.

She added that the Islam Conference should not be "another instrument of security policy."

Muslim groups had tried to focus this year's conference on poverty and low education among Muslims and on easing friction between Muslims and the German school system. 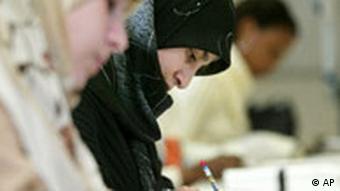 Education was a key focus of this year's Islam Conference

Common ground has been found in that both sides welcome state-salaried religion teachers being trained at German universities to teach in public schools. The state of North-Rhine Westphalia has committed to introducing lessons on Islam in the school year 2012/13 and six other states are following suit.

However some Muslim groups remain skeptical about the benefits of the conference.

One Muslim group, the Central Council of Muslims (ZMD), pulled out of the talks about a year ago after denouncing them as a talking shop.

"I don't know if this conference will happen again. There's no substance there. The socially relevant themes are missing," Mazyek added.

The Islam Conference was launched in 2006 on the initiative of then interior minister, Wolfgang Schäuble. Its stated aim is to support the integration of Germany's four million Muslims.

Remarks by Germany's new interior minister on Islam's place in society have irritated many Muslims. They will be closely watching his meeting with Muslim organizations at the third Islam Conference Tuesday. (28.03.2011)