Jihadis of the "Islamic State" have released a document detailing what "owners" are permitted to do with enslaved women. The fatwa is a part of documents seized by the US army in May, according to Reuters news agency. 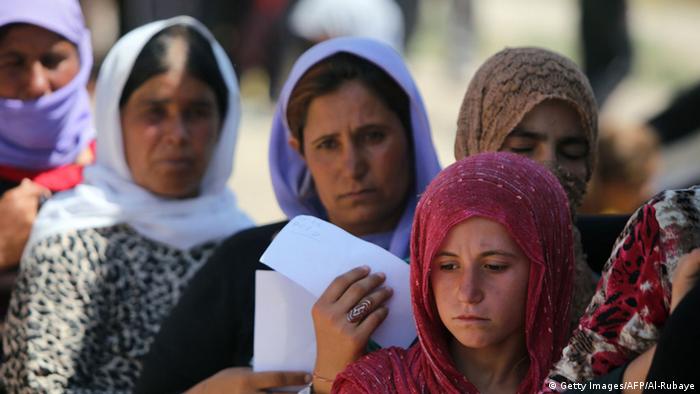 US soldiers retrieved a huge trove of documents during a raid in Syria in May this year. The fatwa was one among many such rulings passed by "Islamic State" (IS) militants, who have captured vast swathes of Iraq and Syria.

"Some of the brothers have committed violations in the matter of the treatment of the female slaves. These violations are not permitted by Sharia law, because these rules have not been dealt with in ages, said a document titled "ISIL committee of research and fatwas" published by Reuters news agency.

Rules in the Fatwa No. 64, dated January 2015, include a ban on a father and son having sex with the same woman and the owner of a mother and daughter pair having sex with both. Joint owners of a single female are not allowed to have sex with her.

"The owner of two sisters in not allowed to have intercourse with both of them [sic.]; rather he may only have intercourse with just one. The other sister is to be had by him, if he were to relinquish ownership of the first sister by selling her, giving her away or releasing her," another injunction says.

This is the first proof of a document released by the terror organization codifying sexual relations between IS fighters and their female prisoners. The fatwa also contains rules on "showing compassion" towards a female slave. It orders jihadis to be "be kind to her, not humiliate her and not assign work she is unable to perform." Another rule also forbids terrorists to sell their women to an "individual whom he knows will treat her badly or do unto her what Allah has forbidden."

The United Nations and other human rights groups have repeatedly voiced concerns about IS fighters raping and abducting thousands of women and underage girls, especially from the minority Christian Yazidi community in northern Iraq. Many women were handed over to fighters as rewards or sold as sex slaves.