'Islamic State' (IS) militants have blown up the temple of Baal Shamin in the ancient Syrian city of Palmyra. The head of antiquities at the Roman-era site was beheaded by Islamists just a week ago. 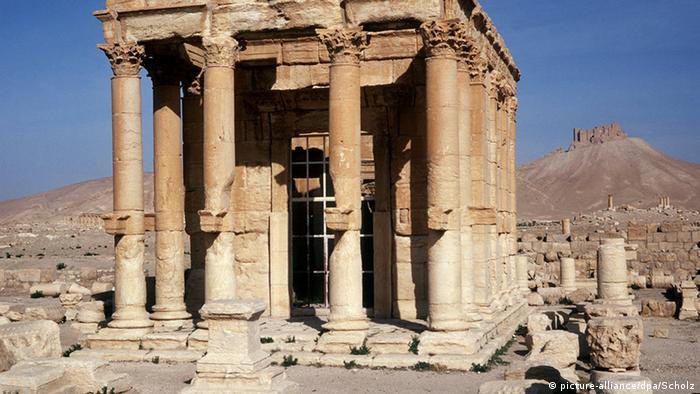 Conflicting reports over when the temple was actually destroyed are yet to be confirmed. Syria's antiquities chief Maamoun Abdul Karmin reported that the temple was blown up on Sunday, whilst the British-based Syrian Observatory for Human Rights said it was destroyed a month ago.

Both sources agreed, however, that the Islamist extremists used large amounts of explosives to demolish it.

IS "placed a large quantity of explosives in the temple of Baal Shamin today and then blew it up causing much damage to the temple," Abdulkarim told AFP news agency.

"The cella [inner area of the temple] was destroyed and the columns around collapsed," he added.

The Baal Shamin temple dated to the early first century and was dedicated to the Phoenician god of storms and fertilizing rains.

It was not immediately clear whether the nearby temple of Bel, dedicated to the Semitic god of Bel, had also been affected by the blast.

Palmyra was taken by IS in May, sparking concerns that militants would destroy the UNESCO World Heritage site, causing destruction similar to several ancient sites in neighboring Iraq.

In January, videos were unearthed which showed IS destroying ancient artifacts in the central museum in Mosul.

Just last week, Syria's Mar Elian monastery, whose origins date back to the fourth century, was destroyed by IS militants who published a photo online purporting to show the destruction.

Reports of the destruction of Baal Shamin temple on Sunday came less than a week after IS militants beheaded Khaled Asaad, who worked as head of antiquities in Palmyra for over 50 years. The 81-year-old scholar had been detained and interrogated by Islamists for more than a month.

Basra to Bonn: The journey of an Iraqi DW journalist

How does an Iraqi journalist feel about the bad news that keeps coming out of his country? Abbas al-Khashali says that, no matter what you hear in the news, Iraq is better off today than it was under Saddam Hussein. (14.08.2015)

Palmyra: Destruction of an oasis of cultural history