Militants have attacked Iraq's largest oil refinery. The governments of multiple countries have reported missing citizens and vowed to do everything they can to protect national interests within Iraq. 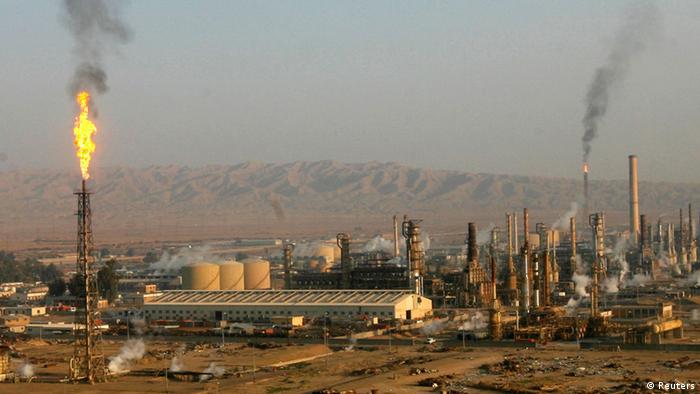 The attack on the refinery by rebels from the Islamic State of Iraq and the Levant (ISIS) started at 4 a.m. (0100 UTC) in Baiji, security sources and employees told news agencies. One mortar hit a spare-parts warehouse and smoke billowed from the building, the sources told the news agency Reuters.

Authorities evacuated foreigners from the refinery Tuesday as forces braced for the attack. Late Tuesday, reports had suggested that the compound was still being held by elite government troops, while the nearby town fell to ISIS fighters.

On Wednesday, Saudi Arabia's foreign minister warned of potential civil war in Iraq as Sunni militants pulled within 60 kilometers (40 miles) of Baghdad. The ISIS insurgents, who launched their lightning assault on June 9, have since captured Mosul, a city of more than 2 million inhabitants, and a large area of land north of the capital. Soldiers from the Iraqi army and Shiite militias have joined forces to repel the ISIS fighters.

Indian officials have lost contact with about 40 construction workers in Mosul. On Wednesday, Indian Foreign Ministry spokesman Syed Akbaruddin said dozens of workers from the country lived in areas overrun by ISIS and that the body would do everything in its power to repatriate them.

Turkey announced that about 40 workers had gone missing in ISIS-controlled areas.

On Wednesday, Iranian President Hassan Rouhani said his country would do everything in its power to protect Shiite Islam shrines in Iraq.

After dismissing Iraq's top military brass on Tuesday, Prime Minister Nuri al-Maliki said that a senior army officer would face court-martial for abandoning “professional and military duty.” Maliki said that Hidayat Abdulraheem, a commander, had fled a battle and would be referred to the military court to be tried in absentia.

The US will deploy up to 275 troops to protect the country's embassy in Baghdad. The soldiers will be tasked with providing support and security for employees. The deployment is the first time the US has sent troops to Iraq since withdrawing forces from the country in 2011.