Is social distancing during coronavirus causing more suicides? | Germany | News and in-depth reporting from Berlin and beyond | DW | 30.05.2020 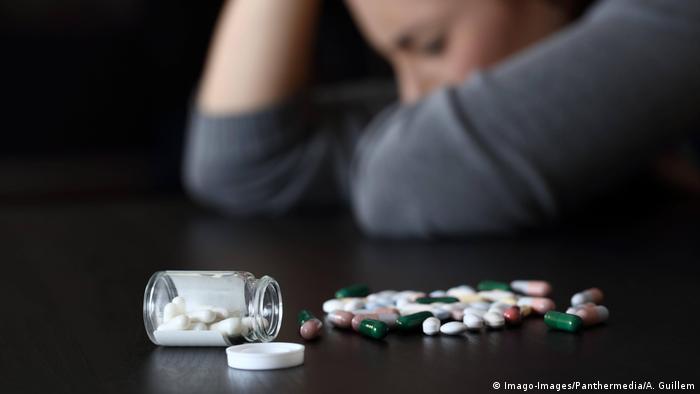 In early March, as Europe found itself facing rising coronavirus infections and realized that the ties that form society were about to be reduced to only the most necessary of interactions, mental health professionals warned that the consequences could be deadly.

The combination of enforced isolation, increased anxiety, financial worries, and reduced access to therapy could leave those suffering alone at risk, they warned. Many experts feared this could even lead to a rise in the suicide rate in Germany.

Some anecdotal evidence appeared to back this up. At the end of April, the German fire brigade union told Business Insider that emergency responders were dealing with more suicides and finding suicide notes mentioning fears of a coronavirus infection — though it admitted that it did not keep official figures.

But now preliminary official statistics for Germany actually show a reduction in suicides during the coronavirus outbreak. Between 9,000 and 10,000 people commit suicide in Germany every year, though the numbers have almost halved since 1980.

Read more: Coronavirus and mental health — we are not made for isolation

In early May, the Augsburger Allgemeine newspaper conducted a survey of the seven German states that update suicide statistics frequently and found that the suicide rate had actually dropped by 20% since lockdown measures began compared to the same period last year.

It's hard to explain that in the absence of empirical research, said Thomas Voigt, deputy chairman of the Deutsche Depressionsliga ("German Depression League"), which provides remote and online help for people with depression.

"But I can say that since the coronavirus crisis, the demand [for online mental help services] has dropped significantly," he told DW. "It is a paradox."

But the low demand for online help doesn't mean people haven't been struggling in isolation, he added. "One explanation could be that you have to be active, in a certain way, to ask for help," he said. "And because there are many extra difficulties now people are so overburdened that they don't even manage that."

Remote online therapy also may not be a solution for some, he says. "Of course it's difficult to maintain therapy because of the distancing regulations," Voigt said. "People with depression often need human contact. They don't want to sit in front of a machine."

In a statement written as the pandemic began, Ulrich Hegerl, chairman of the German foundation Deutsche Depressionshilfe (DDH), was careful to distinguish between a general increase in anxiety felt in a particular situation and depression.

"Suicides … are caused in 90% of cases by a negatively distorted view of the world brought about by depression and other psychiatric illnesses," he wrote. "Depression, by far the most frequent cause of suicides, is an independent illness, and not a reaction to difficult circumstances."

Hegerl warned that due to social distancing there may be less chance that friends or relatives recognize when someone is in a suicidal crisis and can organize professional help.

"It's certainly true that the support situation has worsened, and fewer people are coming to therapy, out of exaggerated fears, or because they think the medical services don't want them because they're only treating coronavirus patients. Many people with depression tend to have guilt feelings," Hegerl told DW. "For me, there aren't enough numbers yet to say anything definite about the suicide rate."

While those who already suffer from depression may not have been seeking any more help than normal, there seems to be little doubt that the pandemic has had a general impact on mental health. Several surveys around the world have shown this.

In the US, for example, the Kaiser Family Foundation found in late March that 45% of adults believed the pandemic had affected their mental health, and 19% said it had had a "major impact." Meanwhile, the US Disaster Distress Helplines saw calls from February to March increase by over 300%.

In Germany, 3,545 people volunteered for a survey by the Hannover Medical School (MHH) that focused on the first two weeks of April, when Germany's lockdown measures were at their most drastic. The survey found that 50.9% said they had become more irritable and 29% found themselves angrier and more aggressive.

A survey published in early May by the Danube University Krems in Austria found even more alarming numbers: The proportion of Austrians with "depressive symptoms" had risen from around 4% to over 20%, while those with "fear symptoms" had gone up from around 5% to 19%.

Professor for Psychosomatic Medicine Christoph Pieh, who co-wrote the Krems study, believes the risk of suicide has increased in Austria, despite the preliminary figures in neighboring Germany. Pieh is also skeptical because there are always a high number of unknown suicides. "There has definitely been a rise in depressive syndromes in Austria," Pieh told DW.

The danger of a downturn

Hauke Wiegand, doctor of psychiatry and psychotherapy at the University Medical Center Mainz, also warned that all the surveys and figures coming out now only show snapshot insights of a short period of time. Still, he has also noticed a decrease in the number of patients with severe depression and anxiety coming to his clinic during the pandemic, while the number of people suffering from schizophrenia, for example, has remained roughly the same.

But Wiegand had another point: History shows suicide rates always go up during economic depressions — with the main risk factors being "unemployment and financial distress," and it is too early to tell whether this is happening now. Following the 2008 financial crisis, he said, "in the US every one percent increase in the unemployment rate was accompanied by a one percent increase in the suicide rate."

"We saw the same in Greece following the austerity measures," Wiegand added, though he pointed out this did not happen in countries with a stronger welfare state, "which cushioned the worst."

Statistics also back this up: One 2014 study by Portsmouth Universityin the UK found that every 1% in spending cuts in Greece was coupled with a 0.43% rise in suicides among men.

Meanwhile, Wiegand has also noticed a countereffect. He is working on an as yet unpublished survey by the Leibniz Institute for Resilience Research Mainz. Its preliminary results show that many people are actually feeling less stressed under lockdown measures.

"They have reduced work times, they might not have to commute to work, they have more time with their families, which reduces overall stress levels — as long as their jobs are secure," he said.

If you are suffering from serious emotional strain or suicidal thoughts, do not hesitate to seek professional help. You can find information on where to find such help, no matter where you live in the world, at this website:https://www.befrienders.org/

You can find more stories about Germany here.