The museum's special exhibit, entitled "Two Million Years of Migration," shows that ultimately we're all migrants. It also reveals that today's migration routes are uncannily similar to those from thousands of years ago.

The way into the special exhibition "Two Million Years of Migration" goes through a curtain consisting of threads that confront visitors with the question, "Am I a migrant, or not?" Visitors can reflect on their personal answer before walking through the curtain into the show.

For me, the answer is clear. In 2014, I came to Bonn to study, and I will stay in Germany until I finish my master's degree. And in Germany, I am a unquestionably a migrant - even if my home country, Luxemburg, is just a stone's throw away from Bonn.

Regardless of how you categorize yourself in relation to migration, the exhibition provides some light-bulb moments as it tries to make clear that, ultimately, we're all migrants. "Our objective is to show that migration is an intrinsically human phenomenon going back millions of years," said Gerd-Christian Weniger, the director of the Neanderthal Museum. 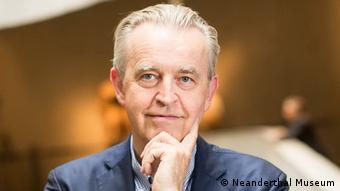 Prof. Gerd-Christian Weniger is the director of the Neanderthal Museum in Mettmann

The special exhibition is accompanied by a special research project entitled "Our Way to Europe" that has been carried out in cooperation with the Neanderthal Museum since 2009. In it, scientists from the universities of Aachen, Cologne and Bonn explore the movement of people from Africa to Europe. Where did they come from? And where did they go?

One route that seems to always have played a central role leads from the Middle East via present-day Turkey to eastern Europe. The Strait of Gibraltar came to be used as a migratory bridge only much later.

The scientists noted that these ancient migration patterns astonishingly resemble today's movements of migrants. "When we discovered this in 2015, it became clear to us that we need to get involved in the political discussion, and that we need to add our point of view and our insight into human migration to this debate," Weniger stated in an interview with DW. In his view, migration cannot be stopped - not even by erecting barriers.

Migration then and now 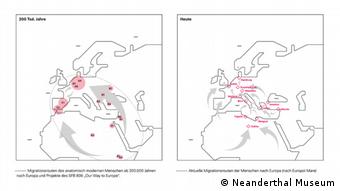 The exhibition tries to build a bridge between the Ice Age and  the contemporary era. How does the show try to realize this? A great part of the exhibition deals with the milestones of prehistorical migratory events. Early man emigrated from Africa some 100,000 years ago. Roughly 7,500 years ago, farmers and cattle breeders from the Middle East migrated to Europe. In the early Metal Age, horse breeders and merchants from the steppes of western Asian migrated to central Europe.

The organizers have inserted all kinds of references to modern times alongside the historic overview of migration. In video interviews, today's migrants and refugees explain how and why they came to Germany.

A change of perspective 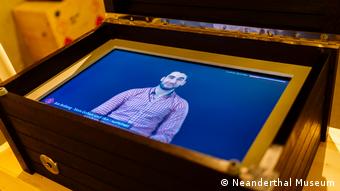 In interviews, migrants and refugees talk about the reasons for their flight

The show's organizers are aware of the fact that there is no direct connection between the migrants of prehistorical times and those of today. The reasons for migrating have changed. Whereas the early hunters followed their prized herds, people nowadays flee the wars and poverty of their home countries. Still, "The development and the evolution of man are closely intertwined with migratory movements," Weniger added. "The mobility of man and changes in his environment are part of the picture. Considering these facts, simply closing off borders cannot be a solution to the present refugee crisis, Weniger claimed.

The exhibition seeks to offer a new perspective by enabling visitors to move back in time in order to look at the issues with a point of view that has not been influenced by current events at European borders. The show in the Neanderthal Museum asks visitors to think about their own origins before talking about immigration limits. As one visitor put it: "We're all just people."

The special exhibition "2 Million Years of Migration" runs until November 5, 2017, in the Neanderthal Museum in Mettmann near Düsseldorf.

July 28 is Refugee Convention Day. This key legal document protecting refugees was drawn up in 1951 in the wake of the Second World War. Ratified by 144 countries, it sets out refugee rights under international law. (28.07.2017)

An exhibition at the Neanderthal Museum in Mettmann shows that man has always been on the move. (15.08.2017)