Kreshnik B. is the first 'Islamic State' fighter to stand trial in a German court. He wants to testify and is hoping for a lenient sentence. But in Frankfurt's Higher Regional Court, he talked his way into trouble. 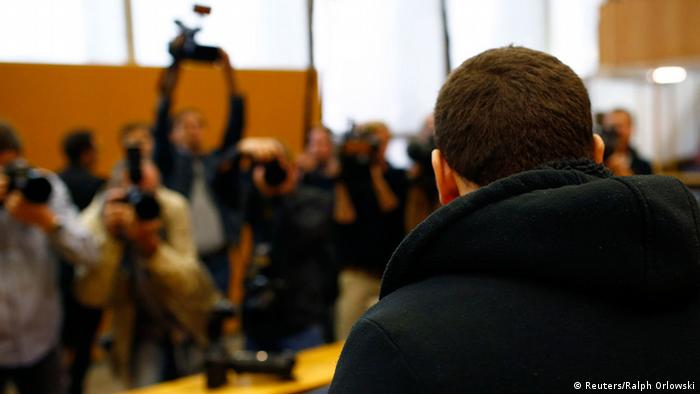 "Are you cold? You can take off your coat - we're not going to do anything to you," presiding judge Thomas Sagebiel told the defendant during Thursday's trial (30.10.2014). Kreshnik B., 20 years old and born in Bad Homburg in western Germany, appears in court in sweatpants and a thick, bright red winter coat. He takes off his jacket and, in a quiet voice and short sentences, begins to speak. He recalls how in July 2013 he traveled to Syria to join the "Islamic State" (IS) militia, but didn't get on very well and returned to Germany in December - without firing a single shot, he insists.

He was arrested at Frankfurt airport. Membership in a foreign terrorist group is a charge that carries a ten-year prison sentence. Judges and prosecutors, however, have offered a lighter sentence in mind if Kreshnik can explain why he joined the jihadists and more information about the group. But mid-interrogation he utters the fatal sentence: "Actually, I still want to die a martyr."

At this point, even his lawyer, Mutlu Günal, looks horrified. He convinced his client to testify in the trial, against Kreshnik B's initial wishes. A written statement, read by Günal at a previous trial date, wasn't enough for the court, so now the defendant must answer questions in person. 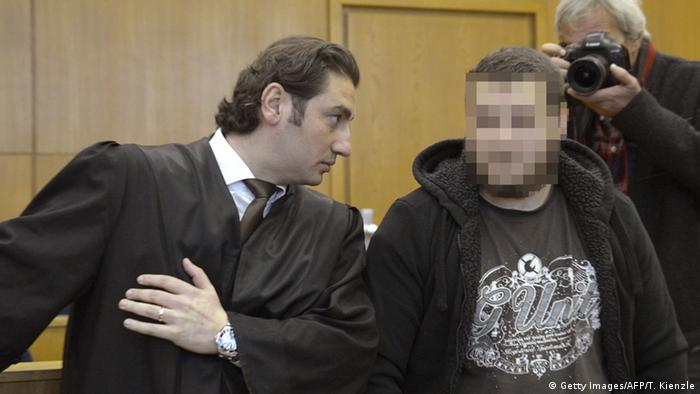 Kreshnik B. may have got himself into trouble on Thursday

But his testimony doesn't really shed any light on the situation. Who radicalized him? Kreshnik refuses to point any fingers. How did he get to Syria? Via Istanbul, then by bus with six other recruits. He was trained with weapons, but he was stationed at the back in every battle. "They didn't want me to fight at all," he says. He sounds almost a little offended. He saw various Islamist groups fighting each other. "I find that sad," he said. For him, the aim was to defend his "brothers and sisters" against the Assad regime in Syria. Even now he believes this is the right thing to do.

This does nothing to assuage Sagebiel's doubts about the defendant, who claims he "wants to lead a normal life." Intelligence agencies have intercepted and recorded phone calls and conversations with his sister which showed that Kreshnik was certainly an enthusiastic fighter whose family tried hard to persuade him to give up his adventure. The court also has a video, in which Kreshnik can be seen dressed as an armed fighter. "I can't remember where that was," he said.

Kreshnik also said it was boring there - he is willing to tell the court that much. He took part in three combat missions, but "only right at the back, with the medical orderlies." The Arab and Chechen IS fighters were always in charge, and did not trust the Europeans with much responsibility. Sagebiel asked him who is leader was. "No idea," said Kreshnik.

"This is all too little for me here - you'll have to offer more than that," the judge responded. Kreshnik said nothing and looked at his lawyer. He could get away with three or four years in jail - if his answers satisfy the court. Based on Thursday's proceedings, it doesn't look like they will.

First Peshmerga cross Turkey border into Kobani to fight 'IS'

The first of a group of nearly 200 Iraqi Kurdish fighters has arrived in Kobani to fight against "Islamic State" jihadists. Under international pressure, Turkey recently agreed to allow the fighters to pass the border. (30.10.2014)

A German advance mission has been dispatched to Iraq to scope out the potential for Germany to expand training of peshmerga forces. Germany has already sent weapons to aid the Kurds in the battle against "IS" militants. (30.10.2014)

Syria's army has barrel-bombed a displaced persons camp in the north, according to residents, with video footage appearing to show charred and dismembered bodies. Regime forces have repeatedly hit the Idlib province. (30.10.2014)