A German advance mission has been dispatched to Iraq to scope out the potential for Germany to expand training of peshmerga forces. Germany has already sent weapons to aid the Kurds in the battle against "IS" militants. 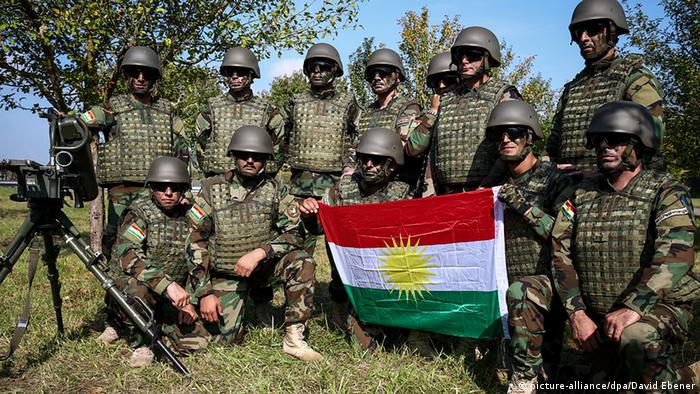 The expert team, made up of three Defense Ministry representatives and an official from the Foreign Office, was to travel to Irbil in northern Iraq on Thursday. They are tasked with assessing whether Germany's Bundeswehr could help in providing Kurdish peshmerga forces with comprehensive military training.

"Together with our partners and allies, we are currently reviewing whether we will intensify our efforts in training in Irbil," Defense Minister Ursula von der Leyen said on Wednesday.

The Kurds are heavily involved in the fight against extremists from the "Islamic State," (IS) which has captured large parts of Iraq and Syria, forcing hundreds of thousands of people to flee their homes.

According to reports in the German media, the federal government is considering sending some 100 soldiers to Iraq to help with training Kurdish armed forces - a move that would constitute an expansion of Germany's role in combating IS.

Germany began delivering weapons and other military supplies to northern Iraq last month as part of a plan to arm 10,000 peshmerga fighters. It then sent 13 Bundeswehr soldiers to Irbil to give instruction on how to operate the equipment.

Since the end of September, a number of Kurdish soldiers have also been receiving training on how to use the "Milan" anti-tank guided missile system at the infantry school of the German Bundeswehr in the Bavarian town of Hammelburg.

For the past several weeks, Kurdish forces have been receiving additional support from a US-led coalition, which does not include Germany, that is carrying out airstrikes against IS targets in parts of Iraq and Syria. Many of the recent bomb raids have been concentrated around the Syrian border town of Kobani, known as Ayn al-Arab in Arabic, which has been besieged by IS fighters since mid-September.

This week the Iraqi Kurdish authorities sent some 150 peshmerga fighters equipped with heavy weapons to help the forces defending the town. The reinforcements began entering Kobani via Turkey's border crossing on Thursday.

The Free Syrian Army, which is fighting against both the regime in Damascus and the Islamists fighters, has also sent a group of its soldiers to the town.

At least 800 people have been killed in the fighting in and around Kobani, with more than 200,000 fleeing across the border into Turkey.

Iraqi Peshmerga arrive in Turkey to head for Syria

Iraqi Peshmerga fighters have arrived in Turkey bound for the Syrian border to help fellow Kurds fight "Islamic State" extremists. Turkey has said it will allow the fighters to cross, but will not send its own troops. (29.10.2014)

The German parliament has met in a special session to debate plans to ship weapons to Iraq. The opposition was critical of the shipments, warning that these arms could easily fall into the wrong hands. (02.09.2014)

'We can't track every weapon we deliver'

Germany will begin delivering arms and equipment to the peshmerga, Kurdish fighers from northern Iraq currently fending off the "IS" terror group. DW discussed the deliveries with a liason officer on the ground. (04.09.2014)