Is Bangladesh safe for foreigners?

With England cricket team's upcoming visit, the security situation in Bangladesh has once again come under the spotlight. Major doubts over safety arose after a gruesome attack in July left many foreigners dead. 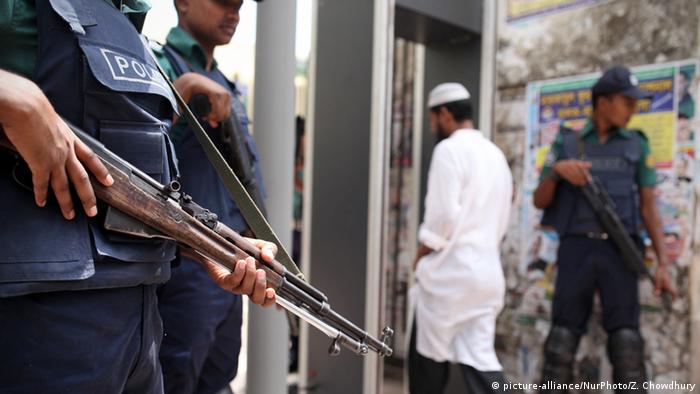 Following a wide-ranging discussion on the current state of security in Bangladesh, the national cricket team of England recently announced that it would tour the South Asian nation to play five matches with the home team.

The English players will be visiting the country in October and matches are scheduled to take place in the capital city of Dhaka as well as the port city of Chittagong.

However, two English players of the team and a prominent fan group have refused to travel to the country citing security concerns.

The team's visit comes after a barbaric attack on a Spanish restaurant in Dhaka killed 20 people, including 18 foreigners, in July this year. The so-called ''Islamic State" (IS) terror group claimed responsibility for the attack.

The attack shocked the world and forced some Western countries to issue Bangladesh travel warnings for their respective citizens. The US believes the terrorist threat in the Muslim-majority country is "real and credible.''

The warning has remained the same even though nearly three months have passed without any major security breakdown since the previous attack.

To crack down on terrorists after the Dhaka attack, Bangladeshi police have conducted a number of raids on suspected terrorist dens. Nine suspects were killed in one of those operations on July 26 in Dhaka's suburb Kallyanpur. Most of the suspects killed in the operation were young and from the upper class of society. One of them even had US citizenship.

In another operation in Narayanganj, a district near the capital, police killed three suspected terrorists on August 27. One of those killed in the operation was a Bangladeshi-Canadian citizen who had visited Syria in the past and was a "mastermind" of the Dhaka restaurant attack, according to police.

Tasneem Khalil, a Sweden-based journalist who monitors online channels of jihadists, believes that the recent crackdown against jihadists has improved the security situation, especially in Dhaka. He, however, criticizes the government for not being able to arrest top suspects alive.

Security forces in Bangladesh have reportedly killed three militants, including the suspected mastermind behind July's deadly Dhaka café attack. The Dhaka siege was one of the nation's worst-ever terror attacks. (27.08.2016)

Police in Bangladesh have raided an Islamist hideout and killed nine militants who were planning a major attack, officials say. A survivor claimed the group was part of the "IS," but officials reject the link. (26.07.2016)

"Until now, law enforcement agencies have failed to capture any of the top jihadists alive. I see this as a terrible failure of the present government,'' he told DW, adding: "One of the previous governments, for example, captured the founders of a local terrorist group. They were interrogated and then produced before the court. That was crucial in uprooting the organization.''

''This is not happening now. And, it is very alarming,'' Khalil stated.

Masudur Rahman, the spokesperson of Dhaka Metropolitan Police, says the killing of suspects during the police raids was not intentional. "We try to arrest the suspects alive and that's our top priority. But if we can't arrest them and if they shoot at us, then we have the lawful rights to shoot them back,'' he told DW.

Despite the controversies surrounding police actions, they seem to instill more confidence in foreigners living in Dhaka. Andrew Eagle, an Australian working for the Daily Star, Bangladesh's largest English newspaper, told DW that the security situation has improved in recent weeks.

"Just after the attack, there was a feeling that nothing could stop them. And it was not clear how ingrained the network of terrorists was,'' he said. "There is much more clarity now about how established terrorists are in Bangladesh and I'm sure there aren't many of them,'' the Australian stressed.

Eagle, who has been living in Dhaka for eight years, acknowledges that a lot of foreigners left the city after the recent terror attacks, and he doesn't see them coming back anytime soon as there's still a sense that anything could happen suddenly.

"But I guess, in some sense, that's true for any country in the world these days,'' he concluded.

For Khalil, the recent improvement in the security situation is not enough to say that the country is safe again for foreigners. "Both al-Qaeda and IS are still active in peripheral areas of Bangladesh,'' he warned.

The United States believes that elements of Islamic State are "connected" to operatives in Bangladesh, US Secretary of State John Kerry said while visiting Bangladesh on August 29.

But the country's government is still in denial mode with regard to IS presence.

Meanwhile, Bangladesh's security forces are making massive security arrangements for the English team. Snipers and tanks are set to be deployed around the hotels where the team will be staying during their visit to the country. A special security operation supported by the military and police will oversee the players. "The team and its supporters will get the maximum security possible,'' ensured police spokesperson Masudur Rahman.