Iraq sentences 40 'IS' members to death over Tikrit massacre

A Baghdad court has sentenced scores of captured "Islamic State" ("IS") fighters to death over their role in 2014 massacre in Tikrit. The mass killing of up to 1,700 Shiite soldiers became a symbol of IS brutality. 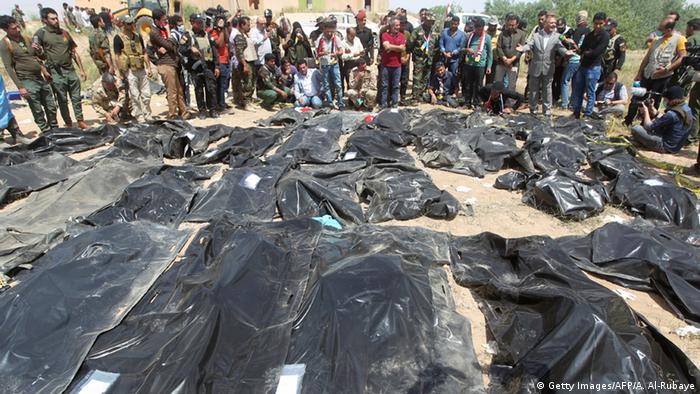 The defendants were found guilty on terrorism charges and convicted to death by hanging, spokesman for Iraq's Supreme Judicial Council, Abdul-Sattar al-Birqdar, said on Thursday.

According to the court, the captured IS members were involved in the so-called Speicher massacre at an ex-US base near Tikrit. The Islamist militia killed hundreds of fleeing Iraqi soldiers after taking the city in 2014, and posted videos and pictures of the massacre online. Most of the victims of the Sunni jihadists were members of the Shiite majority.

"The court ordered the execution of 40 (people) convicted of involvement in the incident, while seven were released for lack of evidence," al-Birqdar said in a statement.

All of the death sentences must go through a mandatory appeal process, according to the official. 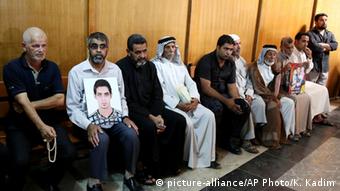 24 IS members were sentenced to death in June

Security forces arrested dozens of suspects after retaking the Iraqi city from IS last year. There are more than 600 suspects in total, sources in the Iraqi judiciary say.

In a similar trial in June, Iraq sentenced 24 IS fighters to death over the killing. All of them have denied involvement and are currently waiting for the outcome of their appeals.

"For Iraqi courts to hand down 92 death sentences in just six weeks is a grim indicator of the current state of justice in the country," the rights watchdog's Middle East and North Africa Deputy Director James Lynch said in a statement.

"The vast majority of the trials have been grossly unfair, with many of the defendants claiming to have been tortured into 'confessing' the crimes," he added.

Iraqi authorities have exhumed hundreds of bodies from mass graves near Tikrit. However, the exact death toll remains unknown. Boasting about the massacre online, IS said it had killed 1,700 Iraqi soldiers, while the Human Rights Watch estimated that 770 troops had been killed.

The incident played a key role in the mass recruitment of Shiite volunteers, and remains among the deadliest acts of violence in the sectarian strife in Iraq.