An Iraqi court has sentenced a group of militants to death by hanging for involvement in a massacre of as many as 1,700 Shiite soldiers near Tikrit. The massacre took place in 2014 at a former US military base. 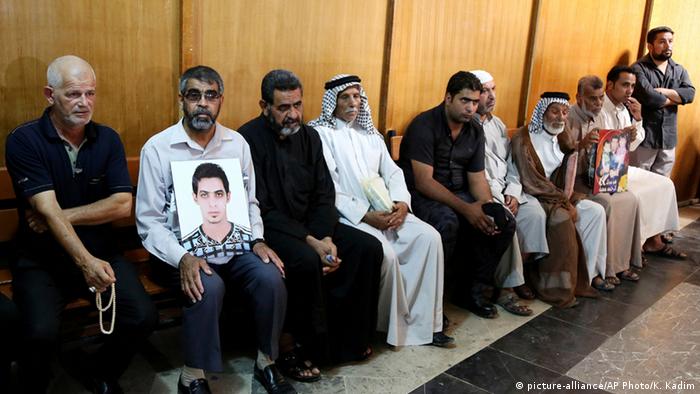 Iraq's central criminal court in Baghdad handed down death sentences to 24 out of 28 defendants standing trial for involvement in the massacre of Shiite soldiers near Tikrit, the hometown of former President Saddam Hussein.

The "Speicher" massacre - named after the former US military base where the soldiers were captured before being slaughtered - is considered one of the deadliest single acts of violence in a decade that has witnessed periodic sectarian war in the country.

"After deliberations, the court finds that the evidence collected is sufficient to convict 24 defendants," the judge presiding over the case said, according to AFP new agency.

"The court decided they will be executed by hanging," the judge said.

However, four of the defendants were acquitted due to lack of evidence.

As many as 1,700 Shiite soldiers are thought to have been killed in the massacre, though only 600 bodies have been exhumed from burial sites in the area since Iraqi military forces - assisted by Shiite paramilitary groups - captured the city from the self-proclaimed "Islamic State" in March.

Video of the Shiite soldiers being gunned down by militants thought to be affiliated with the "Islamic State" circulated online shortly in the summer of 2014.

The "Islamic State" has taken over large swathes of land following a campaign across northern Iraq in 2014, which witnessed the capture of Mosul, Iraq's second-largest city.

The verdict comes amid increased pressure on Iraq and coalition forces to combat the radical militant group, which has shown itself capable in combat and recruitment.