Ayatollah Ali Khamenei has warned Saudi Arabia's rulers they face "certain downfall" for their close ties with the US. Iran's pragmatic president instead called for more cooperation to tackle the region's issues. 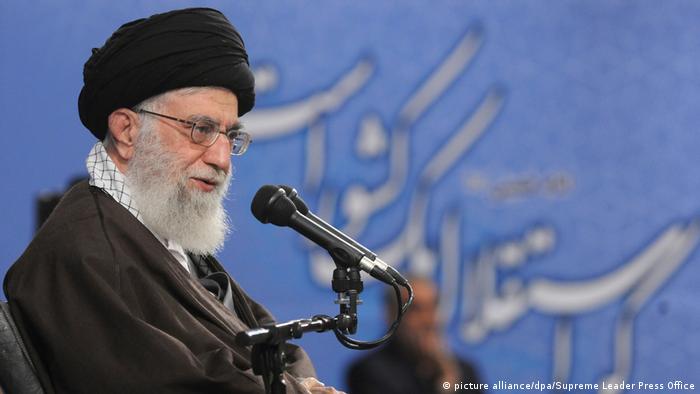 Iran's Supreme Leader Ayatollah Ali Khamenei criticized a US weapons deal amounting to $110 billion (98 billion euros) announced last week between the US and Saudi Arabia, saying Saudi leaders were "idiots" and "milk cows for the Americans."

"They [Saudi leaders] act cordially towards the enemies of Islam while having the opposite behavior towards the Muslim people of Bahrain and Yemen," Khamenei said, referring to the targeted suppression of Shiite communities in those countries.

Last week, US President Donald Trump signed a multi-billion weapons deal with Saudi Arabia during his visit to the kingdom, where he called for regional allies to further isolate Iran.

Saudi officials have often described Iran as the premier state sponsor of terrorism in the region, saying it aims to destabilize the Middle East and export its revolution to other countries.

Tensions have risen between Saudi Arabia and Iran since Trump's ascension to the presidency, in part due to his policy shift on the Islamic republic.

Under former US President Barack Obama's administration, Washington and the international community, including Germany, hammered out a deal that curbed Iran's nuclear program in exchange for dropping sanctions. However, Trump has called for a tougher stance on Iran.

"This package of defense equipment and services support the long-term security of Saudi Arabia and the Gulf region in the face of Iranian threats," a White House official said when announcing the US-Saudi arms deal last week.

Iranian President Hassan Rouhani, known as a pragmatic reformist, offered a more constructive tone for the future of Iran's relations with Gulf nations in remarks made to Qatar's Emir Tamim bin Hamad al-Thani.

"We want the rule of moderation and rationality in the relations between countries and we believe that a political solution should be a priority," Rouhani said. "The countries of the region need more cooperation and consultations to resolve the crisis in the region and we are ready to cooperate in this field."

Relations between Iran and Saudi Arabia have plunged since 2016, when protesters stormed the Saudi Arabian embassy in Tehran and set fire to the building. The demonstration had been triggered by Saudi Arabia's execution of a Shiite cleric.

Last year, Khamenei lashed out at Saudi Arabia for excluding Iranians during the Hajj pilgrimage, in part a response to the 2015 crush and stampede that killed 2,411 worshippers in Mecca, Islam's holiest site.

A Revolutionary Guard commander has said Iran constructed a third underground factory to make ballistic missiles. The development is likely to fuel further tensions with the United States. (25.05.2017)