Iran and its negotiating partners have finalized a hard-won agreement on the country's nuclear program. Diplomats welcomed the "historic moment" as the group went into its last meeting before presenting the deal. 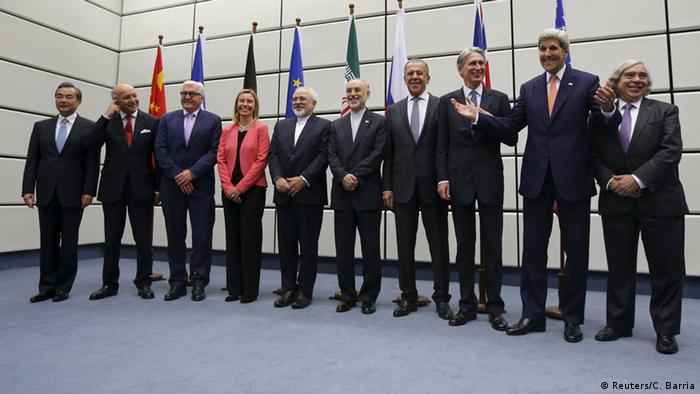 The foreign ministers of Iran, Germany, the EU and the permanent members of the UN Security Council were all smiles going into their last plenary discussion in Vienna before presenting the final deal to curb the Islamic Republic's nuclear program on Tuesday.

"I think this is a sign of hope for the entire world and we all know this is very much needed in this time," the EU’s top diplomat Federica Mogherini said ahead of the meeting.

Iranian Foreign Minister Mohammad Javad Zarif also hailed the deal, calling it a "historic moment." Although he allowed the caveat that the agreement was "not perfect for anybody," he said it still presented "a new chapter of hope" for Iran and its negotiating partners.

In a joint statement before the press, Mogherini and Zarif said they were "creating the conditions for building trust" and that Iran would "under no circumstances" be able to build a nuclear weapon.

The agreement, Mogherini said, is "not only a deal. It's a good deal. And a good deal for all sides."

"I said that June 30th would be a long day, but that it would take 348 hours, that I did not expect," said German Foreign Minister Frank-Walter Steinmeier, alluding to the first of several missed deadlines in recent weeks after nearly a decade of drawn-out tension and negotiations. Steinmeier said he would travel to Tehran in response to the accord.

According to Reuters news agency, which reported to have a copy of the deal, the UN's nuclear watchdog, the International Atomic Energy Agency (IAEA), could get access to Iran's uranium enrichment facilities within only 24 days.

Iran, which has always claimed that its nuclear program is for peaceful purposes, would be allowed to continue research and development for the next 10 years, as long as it does not accumulate enriched uranium, Reuters said.

France's AFP news agency said an anonymous French source told them the crippling economic sanctions against Iran could be rolled back as soon as the beginning of 2016, but the other powers reserved the right to re-impose sanctions if Iran does not comply with every facet of the deal.

Not everyone was happy about the agreement, however. Israeli Prime Minister Benjamin Netanyahu called the deal a "bad mistake" which will give Iran "billions of dollars" to "fuel its terror machine."

In live comments televised internationally, including in Iran, US President Barack Obama lauded the American diplomats involved in the talks, saying they helped stopped the spread of nuclear weapons.

In an effort to head off opposition, Obama said the deal "was not based on trust, but on verification," meaning that the IAEA would have "24/7" and "permanent" access to make sure Iran is sticking to its part of the agreement. He said sanctions would be put back in place immediately if Iran backed out.

He also warned that the deal was so important to international security that he would veto any attempts from US lawmakers to hinder the agreement from being implemented. Obama's Democrats control neither house of Congress.

Obama thanked the other negotiating partners, saying "you have shown what we can do when we do not split apart," before singling out Secretary of State John Kerry for his "strong, principled American diplomacy."

A German source close to Foreign Minister Frank-Walter Steinmeier has reportedly said a deal on Iran's nuclear program is in an "absolute final phase." But US Republican lawmakers have threatened to block it in Congress. (12.07.2015)

Iran and world powers have traded blame over the pace of talks on Tehran's nuclear ambitions. Several sticking points remain as both sides say they won't rush a deal. (11.07.2015)