In an interview with NBC, Iran's President stressed that his country would never develop nuclear weapons. Hasan Rouhani appears to be striking the right note ahead of his much-awaited speech before the UN this week. 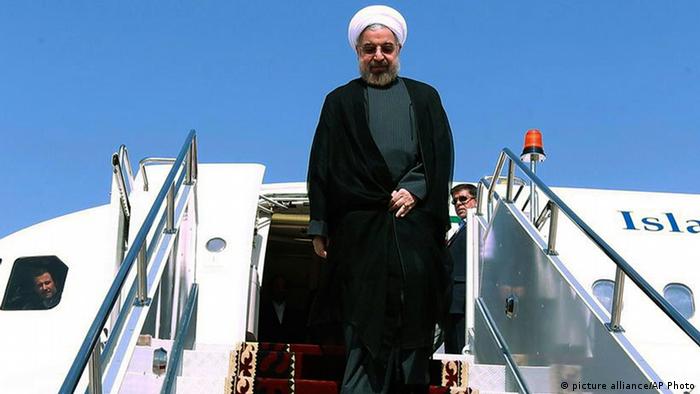 It is being hailed as the beginning of a diplomatic thaw. In an interview with US TV network NBC News, Iranian President Hasan Rouhani spoke about wanting peace and friendship in the region, freedom of information for Iran's people and - most importantly - no nuclear bombs.

"We have said time and again that under no circumstances would we seek any weapons of mass destruction, including nuclear weapons, nor will we ever," Rouhani told NBC News in the interview aired last week. "We have never pursued or sought a nuclear bomb and we are not going to do so. We are solely seeking peaceful nuclear technology."

Of course, Iran has repeatedly claimed that its nuclear activities are for civilian purposes only. But analysts told DW there was more to it this time - both in terms of approach and content.

"A big difference is the style," said Iran expert Rouzbeh Parsi from the Department of Human Rights Studies at Lund University in Sweden. "This is someone you can take seriously and who comes with a clear mandate. He signaled in this interview that when he speaks, he speaks for the Supreme Leader because the Supreme Leader has trust in him."

In his NBC interview, Rouhani said that Tehran would never seek to acquire nuclear weapons while insisting there was "sufficient political latitude" in Iran to resolve the nuclear showdown. He was referring to a statement by Supreme Leader Ayatollah Ali Khamenei - who has the final say on the nuclear drive - that sometimes "heroic flexibility" was necessary in diplomacy. 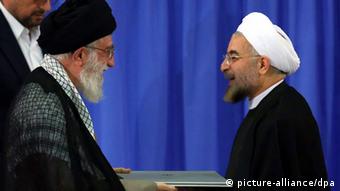 "What Rouhani has said assumes monumentally greater significance because of what the Supreme Leader said," said Daniel Levy, director of the Middle East Program at the European Council on Foreign Relations. "The most significant thing that has happened since Rouhani's election - and perhaps also in over a decade in the nuclear file - was Khamenei's position on heroic flexibility."

In the past, there had been ambiguity about the effectiveness of words expressed by Rouhani's predecessor Mahmoud Ahmadinejad and Iran's subsequent actions.

"Whatever he is going to sign is going to be valid," Parsi told DW. This was not the case in the past. "We never knew whether the signature would survive the return journey to Iran. This is now someone who has a straight line back to the Supreme Leader."

Rouhani spoke to the US television network just days before he is to make his first appearance as president on the world stage when he attends the UN General Assembly in New York. The timing of Rouhani's statements was consciously tied to this appearance, said Dina Esfandiary, research associate in the non-proliferation and disarmament program at the International Institute for Strategic Studies in London. 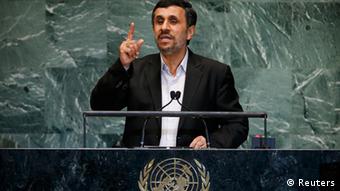 "What the Iranians are doing is strengthening their hand before coming to the UN," Esfandiary told DW. "They are showing they are good and fair players. The message is: 'We aren't Ahmadinejad anymore.'"

Not only is the tone a new one compared to Ahmadinejad's abrasive demeanor, things are also happening at a rapid pace. "It's unmistakable that there is in a very short space of time a quite dramatic outreach going on here," Levy said.

The US needs to play ball

The question is now: how will the US react? White House spokesman Jay Carney said there were no current plans for Obama to meet Rouhani at the General Assembly next week. "I think it's fair to say that the president believes there is an opportunity for diplomacy when it comes to the issues that have presented challenges to the United States and our allies with regards to Iran," Carney said. "And we hope that the Iranian government takes advantage of this opportunity." 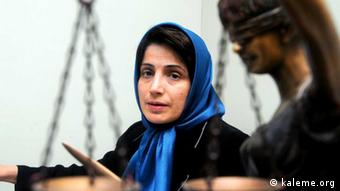 Nasrin Sotoudeh's release is one sign of Iran's opening-up

What is certain is that the ball is now clearly in the US court. "The Iranians have always been good at PR," Esfandiary said. "I really do think this is an effort on Iran's part to show good will and flexibility." In addition, there have been other positive moves, such as the release of prominent political prisoners, including human rights lawyer Nasrin Sotoudeh.

According to Parsi, the overture forces the hand of the US and the EU on what they are willing to deliver. "It's one thing to sit and know that the other side is so impossible that you can make demands, never having to prove what you can deliver yourself," he said. "But that situation doesn't exist anymore."

Developments in Iran over recent months - from Rouhani even being allowed to stand for election to his decisions to replace hardline Saeed Jalili as secretary of the key Supreme National Security Council to tasking the foreign ministry with taking the lead on future nuclear talks - indicate a transformation, said Levy.

The experts agreed that both sides need to give and take. Iran will not simply give in to everything now. "It's a two-way street," said Levy. "You have to demonstrate that you're not in the business of regime change but in the business of satisfaction on the nuclear file and that means an unequivocal willingness to pull back the sanctions in exchange for the kind of progress that would need to be made on the nuclear file."

However, Levy said, Rouhani will of course follow national Iranian interests - and this would also be evident in his speech before the UN General Assembly on September 24.

"I'm pretty sure you're not going to hear the kind of hyperbole and offensive rhetoric that you heard from Ahmadinejad," Levy said. "What you are going to hear is an Iran that says: on reasonable terms of international legitimacy we're here to be engaged with."

But it is not going to be an easy process. "It's only in a fantasy world where you would imagine that they will suddenly give up everything we want them to so that negotiations can be done quickly and be wrapped up," Parsi said. "Our problem so far has been that both sides have been so obstinate but now we're at a point where those obstacles will be sidelined so that you can have a substantial discussion."

The West is hoping for progress in nuclear negotiations with Iran - because of signals of a new reliability under President Rouhani. Iran meanwhile hopes for an easing of sanctions. So is a breakthrough on the cards? (10.09.2013)

Iran has 'Plan B' for post-Assad Syria

A US military strike in Syria will have repercussions across the region, and will certainly raise hackles in Iran. But ultimately, say analysts, Tehran will call the West's bluff, as it always does. (27.08.2013)