Iranians and Israelis start a ′Bombardment of Love′ on social media platforms | Asia | An in-depth look at news from across the continent | DW | 23.03.2012

While politicians in both countries continue to step up the rhetoric, ordinary people in Israel and Iran have launched an initiative to express their respect for each other and their mutual rejection of a possible war. 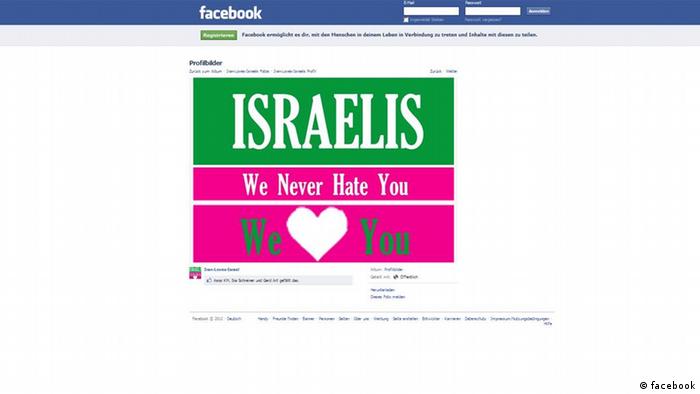 The initiative was triggered by a video shared on the social media platform "YouTube" by Ronny Edry and his wife Michal Tamir, who live in Tel Aviv.

The 41 year old graphic designer explains his motives in the video: "Lately in the news you can hear about the war coming, a big one. Politicians talk about destruction, about self defence, like this war is not about us." He goes on to appeal to YouTube fans to make posters with their photos and express their love of the Iranian people.

Ronny and his wife have made a colourful poster with their photo, holding their little daughter in their arms. Their message was: "Iranians, We love you. We will never bomb your country…No Iranians ever did me harm." 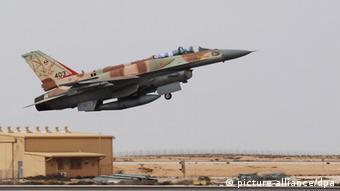 The Israeli, who runs a small preparatory school for graphic design with his wife, argues that Iranians talking about war on Iranian TV are not representative of the Iranian people and what they think about Israel. At the end of the video, he asks everyone who feels the same to share this message and help it to reach Iran.

Reactions in Israel have been extraordinary. A few hours after the video was posted on YouTube, hundreds of Israelis started posting their own photos with expressions of mutual respect and love. A Facebook page was also launched and #israellovesiran became a trend on "Twitter."

Since the start of the "Israel Loves Iran" Facebook page, Iranians from all around the world have started expressing their support.

"My Israeli friends! I do not hate you; I do not want war. Love and peace" is typical of many Iranian posts by Iranian Facebook users on a new sister page called "Iran Loves Israel." Some other posters read: "Iranians don’t want a war with any country in the world."

Most of the Iranians who posted messages on the Facebook page from inside the country, did so with their faces partially veiled for fear of Iranian security forces."Espionage for Israel" is a common allegation used against those critical of the regime’s policies.

Some of the Iranian posters challenged the Islamic Republic’s view that nuclear energy is the country’s "inalienable right." One poster caption reads: "Dear Israeli friends and the world! Iranians love peace and we hate hate! And we don’t need any nuclear power to show it!"

Another photo shows a young couple, kissing each other while showing their passports to the camer. The girl is holding an Iranian passport, the boy’s is Israeli. The caption reads: "I believe in Love. Israelis and Iranians love each other. Believe it."

Interestingly some Iranian Facebook users have also made a clip with pictures of Jewish synagogues, schools, shops and old houses all over Iran to give an unusual glimpse of the life led by the 25,000 to 35,000 Jews living in Iran. 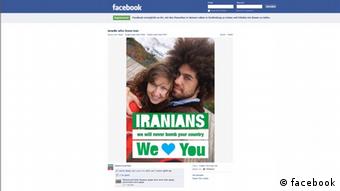 Ronny Edry and Michal Tamir started a 'campaign of love'

Like many other online initiatives and ideas, satirical responses were also quick to appear. A mock post by Prime Minister Benjamin Netanyahu turned up reading: "Iranians! I love you. I truly love you all. It’s my people I hate."

But some Iranian and Israeli users injected the highly contentious Palestinian issue into the campaign pointing out that the "Love Exchange" was ignoring people living in the Gaza Strip and on the West Bank.

As an Iranian Facebook user puts it: "As much as I am touched by the Iranian-Israeli love affair, I have to say this to the Israeli and Iranian people holding "I love you" signs, I love you too, but love isn’t enough." She then launches into an attack on Israel’s policy against Palestine emphasizing that democracy in Israel is "just a claim. Unless you (the Israelis) have a say in what your state does, saying "we will never bomb you" is meaningless."

Others believe such comments are counterproductive. An Israeli Facebook writes "I fear that starting to involve the Palestine issue will decrease the power of this campaign and a lot fewer people will sign and join the initiative. Let’s stay narrow and focused." 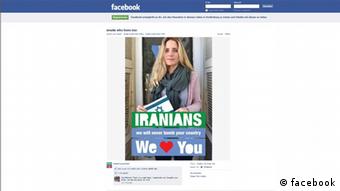 The initiative aims at promoting peace

Despite these differences more than 14,000 people have "liked" the Facebook page of the campaign since it went online a week ago.

Iran and Israel have not had diplomatic relations since the 1979 Islamic revolution. In the Shah’s day the two countries were viewed as allies in the Middle East. Iranians are not allowed to travel to Israel on an Iranian passport. No Israelis have visited Iran for thirty years.

The UN rights council has adopted a resolution condemning Israeli settlement policy in the West Bank, promising to launch an investigation. Israel's prime minister, meanwhile, has called the resolution 'hypocritical.' (23.03.2012)

Iranian president summoned by parliament for first time in history

Iran's parliament has ordered a sitting president to testify before it for the first time in history, part of an ongoing political and power struggle between the president and the supreme leader's respective factions. (14.03.2012)

From Syria to Iran, the EU is in demand as a peacekeeper and negotiator. But a recent meeting of the bloc’s foreign ministers in Copenhagen has revealed that divisions remain over a common strategy. (10.03.2012)