Iranian polls attract unprecedented turnout | News and current affairs from Germany and around the world | DW | 12.06.2009

Iranians lined up in droves to vote in a hotly contested presidential election and late in the day, officials announced that the polls would stay open longer to accommodate everyone. 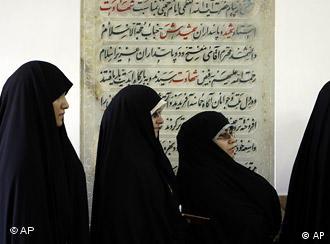 Iranians went to the polls to a elect a new president

Even before the polls opened at 8 a.m. local time on Friday, it was clear that this was no ordinary presidential election and that the sheer number of voters was a sign that the future direction of Iran was being taken seriously by everyone.

But by all accounts, the election came down to a two-man race between Ahmadinejad and Mousavi. 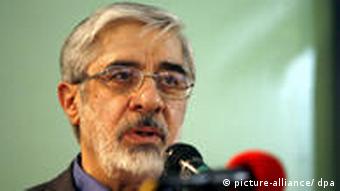 Late in the day, Sadegh Kharazi, an ally of the former prime minister, told the Reuters news agency that surveys made by reformers showed that Mousavi was getting enough votes to win outright in the first round.

"I can say that based on our surveys ... Mousavi is getting 58-60 percent of the vote and we are the winner," said Sadegh Kharaz.

Representatives from Ahmadinejad's camp said the report was just a psychological tactic.

Out of a population of just over 70 million, roughly 46.2 million were eligible to vote.

The differences between the two men are quite distinct. Ahmadinejad, 52, is a fiery hard-liner who has castigated the West, denied the Holocaust and by all accounts mismanaged Iran's economy.

Mousavi, 67, on the other hand, is a reformist, who favors a dialogue with the West, more freedoms for Iranians and a greater role for women in the country.

Reports from the Iranian Labour News Agency (ILNA) indicated that there were many "silent voters" showing up at the polls. "Silent voters" are those whose ID cards are blank on the election page. Voters are given a stamp each time they vote and many voters had intentionally not voted in previous elections as a way of expressing their disapproval of the Islamic republic and a stamp in their election card would be seen as tacit approval.

Each candidate has also garnered the support of different factions of the country. Mousavi draws much of his support from students and men and women in the cities while Ahmadinejad's support comes from the poor in rural areas of the country.

If neither candidate gets more that 50 percent of the vote plus one, there is to be a runoff election on June 19.

EU should play key role in US negotiations with Iran, experts say

Iranians elect a new president on Friday. No matter who wins, observers agree that it's time for Iran and the US to sit down at the negotiating table. And the European Union could act as a vital mediator. (11.06.2009)

Iran has test-fired a missile with a range of up to 2,500km, putting Eastern Europe, Israel, and US bases in the Middle East within striking distance. The timing suggests the launch was made with a wider impact in mind. (21.05.2009)