EU should play key role in US negotiations with Iran, experts say | World | Breaking news and perspectives from around the globe | DW | 11.06.2009

EU should play key role in US negotiations with Iran, experts say

Iranians elect a new president on Friday. No matter who wins, observers agree that it's time for Iran and the US to sit down at the negotiating table. And the European Union could act as a vital mediator. 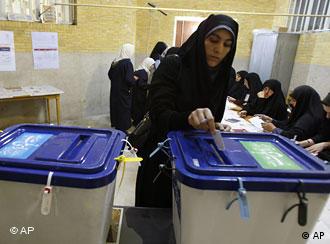 Three candidates are running against Iran's President Mahmoud Ahmadinejad, who is seeking a second term in Friday's presidential elections. Observers forecast that the reformists under former Prime Minister Mir Hossein Mousavi have the best chances of beating Ahmadinejad.

Yet no matter who wins, the time has come for serious negotiations with the West regarding Iran's controversial nuclear program, said Christian-Peter Hanelt, a Middle East expert from the Bertelsmann Foundation.

"It is time for a rapprochement between Iran, its neighbors and the West," Hanelt said. "In order to pre-empt another confrontation in the Middle East and further escalation as a result of the Iranian nuclear program, American-Iranian relations must be put on a sustainable footing after the Iranian presidential elections."

The European Union could play a significant mediatory role in this process, said Konstantin Kosten, an expert on Iran at the German Council on Foreign Relations, DGAP.

"The EU could certainly act as a bridge and door opener," Kosten said. "Direct contacts exist already with the Iranian government and the most significant negotiating circles." The EU's foreign policy chief Javier Solana has been leading talks between Iran and the so-called EU3 (referring to France, Britain and Germany) for years. Due to these contacts, EU officials could provide US diplomats with expertise and support.

US has full EU support

The US administration has chosen a new path in its dealings with Iran. Whereas former President George W. Bush opted for confrontation, placing Iran as part of its "axis of evil," President Barack Obama is going for direct diplomacy. 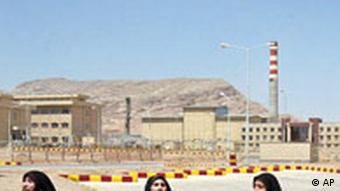 In March, Obama directly addressed the country's leaders in a message to the Iranian people on the occasion of Nowruz, the Iranian New Year. He offered Tehran direct talks without any preconditions.

The US president has full backing from the EU, whose foreign ministers urged Iran to take advantage of the change in US policy to seal a deal and end the stand-off over its nuclear ambitions.

"The EU warmly supports the new direction of US policy towards Iran, which opens a window of opportunity for negotiations on all aspects of Iran's nuclear program and more broadly for engagement with Iran," the EU foreign ministers said in a statement in April. Washington can count on support by its European partners.

"The EU reaffirms its full and unequivocal support for efforts to find a negotiated long-term solution to the Iranian nuclear issue," the ministers said.

In addition to making it clear to Tehran that the EU stands behind US policy, it's also important to send signals of EU support to Washington, said Michael Bauer, head of the Middle East Project at the Center for Applied Policy Research at the University of Munich.

"There are not only proponents of this new policy towards Iran in Washington so I think a first step would be to essentially support the advocates and make clear to them that the European position clearly welcomes this willingness for talks," Bauer said.

The main point of contention continues to be Iran's nuclear program and the country's unwillingness to permit comprehensive and strict controls. Despite the EU's repeated efforts to find a solution, negotiations have failed. 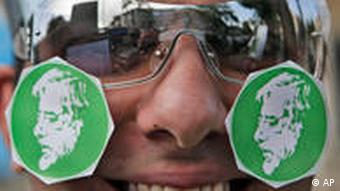 A Mousavi supporter shows where he stands

Hanelt said that only the US could provide the desired security guarantees for the territory of Iran and recognition of its political system.

"For this reason, Europe can now achieve more it if simply provides robust support for the US administration in its forthcoming rapprochement with Tehran," Hanelt said.

Bauer said Iran wanted to be viewed as a "legitimate political actor" with the corresponding security guarantees.

"Iran is first and foremost interested in recognition of its regime by the US," Bauer said. "This is something the Europeans can't offer."

But Iran was also in a strong position at the moment and its support was needed for positive developments in the region, he said.

"The US and Barack Obama will need Iran to keep Iraq stable," Bauer said. "Iran is needed to get a grip on the problems in Afghanistan to some extent. Iran is an important player here."

Any hopes that Iran will abandon its nuclear program are futile, though. Kosten said Iran will want to remain at the helm when it comes to uranium enrichment and civilian use of nuclear power.

"The question is more whether a solution can be found which enables enrichment on Iranian soil," Kosten said. "There has to be an idea how Iran can exercise its rights and therefore save face." Even an attack by Israel on Iran's nuclear facilities would put the program back by a few years, but would not stop it.

Iran's nuclear program as such is not up for discussion, Bauer said.

"That has to be clear and I think it is to Barack Obama," Bauer said. He said the West could at most hope to gain from Iran a degree of transparency of its nuclear program through cooperation with the International Atomic Energy Agency, which can ensure that it is a civilian nuclear program.

A turning point in Iran

The Iranian people are considered to be among the most pro-Western in the Middle East. And many, especially younger people, are fed up with Ahmadinejad's confrontational tone. Mousavi supporters have been taking to Tehran's streets for nightly demonstrations to express their discontent. 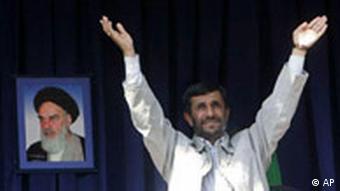 Ahmadinejad's confrontational tone is popular among the rural poor

Ruprecht Polenz, chairman of the German parliament's Foreign Affairs Committee, said Ahmadinejad's defeat would mean a lot for the future of young Iranians.

"When you consider what needs to happen so that the economic situation improves, so that all the young people who finish university each year really have an opportunity to find a good job, then economic reform is necessary," Polenz said. "More intense trade relations are necessary especially with developed nations, such as European countries."

But this requires Iran to change its confrontational foreign policy and focus on cooperation, he said.

Ultimately, though, the real power in Iran is held by its supreme leader, Ayatollah Ali Khamenei.

"Indeed the Ayatollah is the central player in Iran's political system, even when it comes to such matters like the nuclear program," Bauer said. "In the end, the compromise will have to be made with the revolutionary leader."

US President Barack Obama delivered a much-awaited address aimed at healing a rift with the Arab world in Cairo on Thursday, and spoke of a new beginning in relations between the US and the world's Muslims. (04.06.2009)

US President Obama arrived in Saudi Arabia on a Mideast tour marked by a widely-anticipated speech to the Muslim world in Cairo on Thursday. Obama's visit has drawn condemnation by al Qaeda leader Osama bin Laden. (03.06.2009)

Iran has test-fired a missile with a range of up to 2,500km, putting Eastern Europe, Israel, and US bases in the Middle East within striking distance. The timing suggests the launch was made with a wider impact in mind. (21.05.2009)