Artist Kani Alavi has experience with walls. When the Berlin Wall fell, the Iranian immigrant painted what would become the East Side Gallery. Now, as his countrymen are barred from the US, he invites Trump to Berlin. 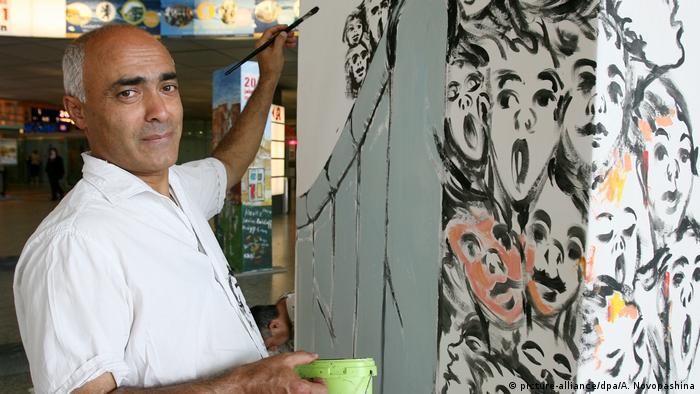 In 1980, artist Kani Alavi left troubled Iran for divided Berlin. When the Berlin Wall came down nearly a decade later, he was among the artists that painted the concrete slabs with images of peace and unity. Their work became the East Side Gallery, which is a popular tourist destination in the German capital.

Alavi was instrumental in the 1999 restoration of the East Side Gallery and its continued preservation. In 2002, one of his paintings from the Gallery was exhibited in the statue garden at the United Nations building in New York City. He has both Iranian and German citizenship.

DW: It now seems dual citizens like you may be allowed to enter the US, if you show your German passport. But what was your feeling when you first learned that Iranians would be barred from the US for at least three months?

Kani Alavi: Anger. When a mother cannot see her son or the other way around - that is very sad. Over many centuries, people from various countries have encountered each other. The US says it is so democratic and can even save the whole world with its politics. And then they say they have to build a wall. That doesn't align with their culture.

What exactly is your personal connection to the US?

My painting is exhibited in the UN sculpture park in New York. In the painting, two people are hugging each other over the Wall. When I think about the possibility of not being able to go there and see my painting after many years, I wonder why I painted it in the first place. When walls exist, cultures are separated. We have to think differently so that the walls - including the walls in our heads - are done away with and people can come together. 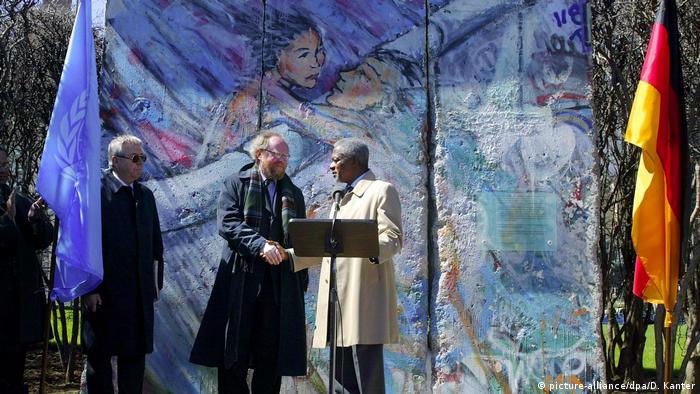 The US travel ban affecting seven Muslim-majority countries is one issue. But Trump's plan to build a wall along the US-Mexican border has also been hotly debated. It is sometimes compared to the Berlin Wall. Do you think this comparison is legitimate?

Walls were forcefully erected in Berlin, but also between North and South Korea, Cyprus and Turkey, and Palestine and Israel - and the plan for Mexico and the US is the same story. These walls were built to achieve political goals, but that is the worst way to achieve anything political.

I think that Trump has walled himself in with his own ideas and they won't work out so easily. It's a short-sighted idea, but he won't achieve anything with it. He will regret it.

If a politician had put up a wall when Trump was a child, then he wouldn't have become so wealthy. He didn't attain his wealth by closing himself in, but through diversity and cultural ties.

You have worked hard for years to preserve the East Side Gallery, which is a part of the Berlin Wall. What does the preservation of this otherwise tragic symbol mean to you?

Ironically speaking, I would say Trump should just build the wall and one day we'll go there and paint it.

In Korea, we're doing something similar. Right now, the Koreans are organizing a second East Side Gallery for us as a symbol of freedom. The artists that painted their own thoughts about the peaceful revolution in Germany in the 1990s became known around the world because their art has been preserved through our efforts. 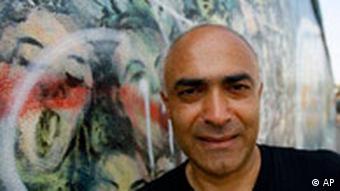 The Korean president was very interested in this. I accompanied her when she visited the East Side Gallery in Berlin. She wanted to know why we painted the Berlin Wall. I said, it's a document and we're fighting to preserve it so that no one comes up with the idea of building another wall in Berlin.

If we can preserve this authenticity in Berlin, then we can show it, for example, to a Korean or an American and say, look, this wall separated people for many years. It is a symbol that we have painted and that we have overcome and now we can show it to prevent it being repeated in the future.

President Trump should come to Berlin and take a look at the East Side Gallery before he builds the wall. Then I can tell him why this wall in Berlin is still standing.

What can an artist do in response to Trump's politics?

We can't do anything except to criticize him with our artistic ideas. There are many artists that have created satirical pictures. Trump will probably look at them at some point, but at the moment, he is not seeing anything. He just wants to assert himself so that the US is on top again.

In the coming months, he will collect himself and think about how he can act differently. As artists, we can use our pictures to help steer his path. We can't go and fight him and make him change his thinking. But through art and culture, theater and music, we have to raise awareness and call for protests so that he changes his opinions.

While Iranian passport-holders are temporarily banned from entering the US, top Iranian artists, authors and musicians take the limelight in Berlin. The Goethe-Institut presents a three-month series, "Iranian Modernity." (31.01.2017)

Stretch of Berlin Wall to be protected from tourists

After "unbelievable" acts of vandalism, Berlin has decided to build a barrier around the East Side Gallery. Officials have blamed tourists who consistently write their names on the wall or chip away at the murals. (05.11.2015)

DW reporter Nicole Frölich presents five highlights in the German capital that are not to be missed – from unique architecture to open-air art and fantastic snacks.