Iranian exiles across Germany protest against Tehran regime | Germany| News and in-depth reporting from Berlin and beyond | DW | 21.06.2009

In several cities across Germany and Europe, thousands of Iranian exiles have taken to the streets to denounce the government in Tehran and last week's disputed presidential election. 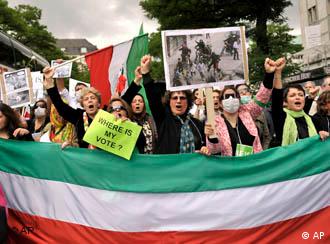 Demonstrations in Hamburg coincided with ongoing protests within Iran

With banners, flowers and photographs of the violence in Tehran, Iranian-exiles condemned the re-election of incumbent President Mahmoud Ahmadinejad.

In Hamburg, police said some 4000 people marched through the city, displaying banners reading "We demand new elections" and "Down with the dictator." The Iranian community in the northern German city is among the largest in Europe.

At the Iranian consulate in Frankfurt, several hundred demonstrators gathered, while in the city center some 300 people called for the release of imprisoned opposition supporters in Iran. In Stuttgart, protestors called upon Chancellor Angela Merkel's government not to recognize the official election results. 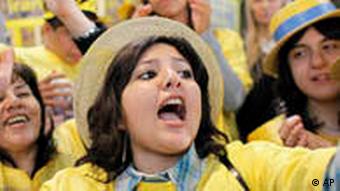 Thousands of people gathered north of Paris on Saturday

In France, tens of thousands of supporters of an exiled Iranian opposition group rallied outside Paris with demonstrators waving banners reading "In support of the Iranian people."

Scores of busses brought supporters of the French-based National Council of Resistance of Iran (NCRI) from across France and neighboring countries to the event.

Expatriate groups have already held a series of smaller rallies this week in several European countries, and in Brussels about 300 protestors gathered on Saturday in a peaceful demonstration outside the Iranian embassy.

Despite censorship in post-election Iran eyewitnesses describe an increasingly tense standoff between authorities and opposition protestors. (20.06.2009)

Riot police and thousands of protesters squared off in Tehran's Revolution Square as Iranian state media reported that a suicide bomber was killed and two others injured at a shrine in the southern part of the capital. (20.06.2009)