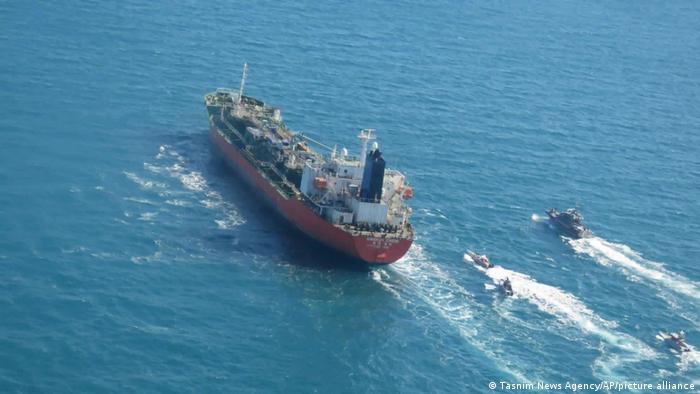 Revolutionary Guards in speed boats seized the Hankuk Chemi, a tanker carrying ethanol, in the Straits of Hormuz as it was traveling from Saudi Arabia to the United Arab Emirates, Iranian media outlets reported Monday.

Seoul’s foreign ministry called in the Iranian ambassador to South Korea for a meeting and urged the early release of the South Korean-flagged tanker and its crew of 20.

It was carrying a cargo of more than 7,000 tonnes of ethanol when it was seized on Monday over what Iranian media said were pollution violations.

South Korea did not immediately comment on Iran's allegation that the tanker had caused "oil pollution" in Gulf waters.

But the government said it is reviewing whether a senior diplomat's trip to Tehran on Sunday will go ahead as planned.

Tensions over US sanctions

Iran has been demanding that South Korean banks release $7 billion (€5.7 billion) in funds frozen because of US sanctions re-imposed on Iran in 2018 after President Donald Trump withdrew from a 2015 multinational deal to restrain Iran's nuclear ambitions.

The US Navy's Bahrain-based 5th fleet said authorities they were aware and monitoring the situation.

The ship seizure coincided with Iran's announcement that it had begun enriching uranium up to 20% at its Fordo underground facility — short of weapons-grade material.

Israeli Prime Minister Benjamin Netanyahu warned that his nation would "not allow Iran to manufacture a nuclear weapon."

Tehran has long maintained that its nuclear program is peaceful.

Iran's Revolutionary Guard took control of a Panama-flagged oil tanker in the Persian Gulf and detained 10 crew members. The Iranian authorities claim the vessel was transporting 300 tons of illegal oil.