As tensions rise between the US and Iran, Tehran has begun its first big war games since President Donald Trump took office. The two-day military exercises are to cover an area of two million square kilometers. 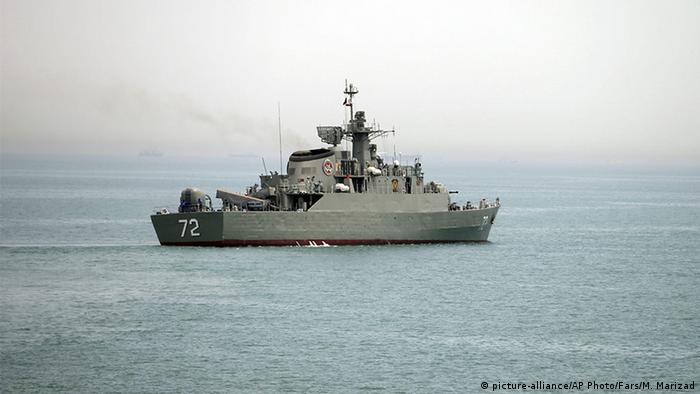 Navy commander Habibollah Sayyari told state television that Iranian warships and helicopters would be participating in two days of war games in the Sea of Oman and the Indian Ocean, covering an area of 2 million square kilometers (772,000 square miles) surrounding the water channel.

A US bill extending sanctions on Iran gives Trump a tool to ratchet up pressure, but that might strengthen hardliners in Tehran. Iran has already upped its rhetoric ahead of elections next year. (15.12.2016)

At the traditional demonstration celebrating the Islamic Revolution, President Rouhani called the new US administration "a problem." While some marchers trampled US flags, other held banners thanking Americans. (10.02.2017)

US slaps new sanctions on Iran over missile test

The Trump administration has issued new sanctions on Iranian nationals and entities, in a clear hardening of policy towards Tehran. Days earlier, Washington threatened Iran over its latest ballistic missile test. (03.02.2017)

The US has put Iran 'on notice' after the Islamic republic's military tested a ballistic missile. The statement from President Donald Trump's new national security adviser is seen as a sign of a tougher approach to Iran. (01.02.2017)

The Revolutionary Guards of Iran have rejected a warning from the US not to close the strategic Strait of Hormuz, saying 'our response to threats is threats.' Iran wants the West to drop the option of new sanctions. (29.12.2011)

The Strait of Hormuz, located between the Persian Gulf and the Gulf of Oman, is of strategic importance for several countries, because nearly a third of all oil traded by sea passes through it. The strait has been the scene of several previous confrontations between the US and Iran.

The US Navy's 5th Fleet, located in Bahrain across the Persian Gulf from Iran, declined to comment on the drills and did not reveal whether it planned to monitor Iran's military exercises.

The drills could increase the tension between the Washington administration and the Tehran government. During his campaign, Trump repeatedly criticized the nuclear agreement between Iran and the international community, including the United States, and promised to get tough with the Islamic Republic.

Last month, a US Navy destroyer fired warning shots at four Iranian vessels near the Strait of Hormuz after they closed in at high speed. Earlier this month, Trump imposed new sanctions on Tehran in response to a ballistic missile test.

Separately, an aide to the Iranian president, Hassan Rouhani, said the leader would be standing for a second term in elections on May 19.

Vice president for parliamentary affairs Hosseinali Amiri was quoted by the state news agency IRNA as he said that Rouhani "has reached the conclusion to take part in the presidential election."

In a speech on Sunday carried live on television, Rouhani said his government stood for opening the country up to the outside world while his opponents sought confrontation and isolation. "We are steadfast in our principles and we don't compromise on them," Rouhani said. "But we should talk to the world, engage and cooperate with it."

Rouhani was first elected in 2013.