A gas explosion at a health clinic in Tehran has left at least 19 people dead. A similar blast occurred at a military site in the capital last week. 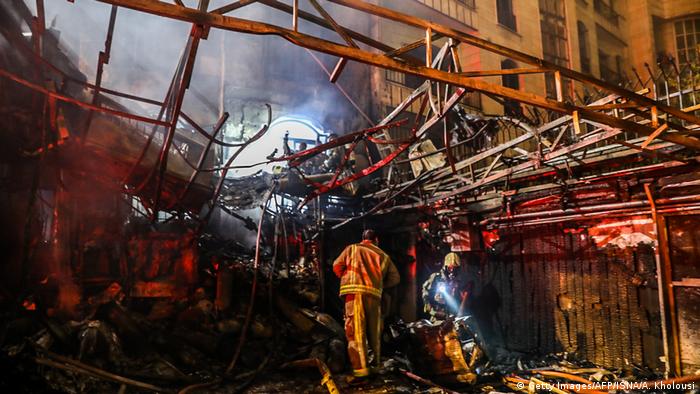 An explosion at a health clinic in northern Tehran killed at least 19 people on Tuesday, according to reports from Iranian state TV. The blast also caused damages to neighboring buildings. Thick smoke could be seen billowing into the night sky, state television reported.

"An explosion was reported at 20:56 (16:26 UTC) followed by a fire at Sina At'har clinic. Medical units were dispatched immediately," the city's emergency medical services said in a statement.

Are Iranians dropping their guard?

Maleki said the blast occurred after gas canisters in the clinic's basement caught fire. Some of the victims "were in upper floors in operation rooms, who were either patients being operated on or those with them," he said. "They unfortunately lost their lives due to the heat and thick smoke."

The clinic, which primarily conducts light surgeries and medical imaging, had 25 employees inside at the time.

Four days ago, a similar gas explosion occurred near a sensitive military complex in the capital. That explosion was caused by "leaking gas tanks," Iran's Defense Ministry confirmed on Friday. There were no casualties.

Ruhollah Zam was arrested last year after being exiled in France. He was accused of inspiring the economic protests of 2017 via online posts and messages. (30.06.2020)

Prosecutors urged Interpol to put out a "red notice" for US President Donald Trump over the deadly airstrike on Iranian general Qassem Soleimani. Iran has pledged to pursue the matter even after Trump leaves office. (29.06.2020)

Iranian authorities are reportedly mulling a ban on Instagram, a popular social media platform in the Islamic country. DW analyzes why the hardline Shiite regime continues to feel threatened by the power of the internet. (23.06.2020)