Some 45,000 boat migrants, including thousands of children, made dangerous crossings of the Mediterranean to land in Italy and Malta in 2013, according to the International Organization for Migration (IOM). 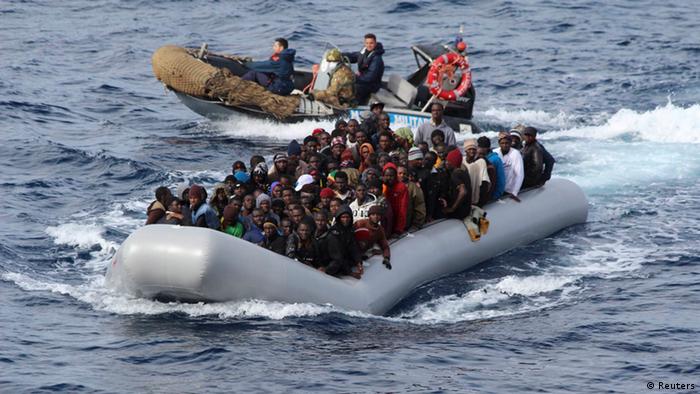 Most were fleeing wars or abuses, said the intergovernmental organization on Tuesday. It listed 11,300 migrants fleeing Syria, 9,800 from Eritrea and 3,200 from Somalia. Among them were 8,300 minors; two-thirds of these were unaccompanied.

The IOM said the "real" tragedies had involved those migrants who had disappeared untraced at sea during capsizes of flimsy, overcrowded boats, which border authorities claim are often operated by smugglers.

These migrants vanished and "simply remain unknown," said Jose Angel Oropeza, IOM's leading coordinator for the Mediterranean based in Rome.

"Numerous relatives of the victims are still waiting to know," Oropeza said, referring to the loss of at least 400 lives in October in shipwrecks off Italy's island of Lampedusa - located near Libya and Tunisia - and off Malta.

The IOM, which works closely with the UN and whose membership includes 155 nations, said landings were continuing off Italy even during Europe's winter months. Last Friday, 204 migrants had been rescued by the Italian navy in the Straits of Sicily.

"We need to find ways to make migration safe and to give these people real choices," Oropeza said.

On Sunday, 13 Moroccan migrants held at a reception center in Rome for more than two months, protested by sewing their lips together.

"They've been left in complete uncertainty, no one has explained anything to them," said Gabriella Guido, spokeswoman for the migrant advocacy group LasciateCIEntrare.

Campaigners say most migrants want to go to other European countries but can find themselves stuck in limbo in Italy.

Right-wing groups, including the anti-immigrant Northern League accuse officials of being overgenerous in comparison to Italians struggling amid economic recession.

After crossing numerous hurdles to reach Europe, many refugees from Africa think their arrival on European soil is the end to their struggles. They soon realise that many more challenges still lie ahead. (27.12.2013)