Police are searching for clues to what led a 64-year-old man to kill 59 people and injure 530 more in Las Vegas. The FBI has said there is no indication that the gunman had ties to international terror groups.

A lone gunman holed up on the 32nd floor of a Las Vegas hotel sprayed bullets down on the Route 91 Harvest Festival in Las Vegas late on Sunday, killing at least 59 people.

Las Vegas police reported that more than 530 others were taken to nearby hospitals, as a stampede of festival-goers scrambled to escape the scene.

The preliminary death toll, which officers said could rise, made the attack the deadliest mass shooting in modern US history. It is higher than the death toll in last year's shooting at an Orlando nighclub, in which 49 people died.

Las Vegas police said SWAT teams used explosives to force their way into the gunman's hotel room at the Mandalay Bay Resort and Casino, where they found him dead.

"We believe the individual killed himself prior to our entry," Sheriff Joe Lombardo told reporters, adding that police had found "in excess of 10 rifles," inside the room. Officers responding at the scene had reported over the radio facing fully automatic fire from the shooter's high vantage point.

Read more: Who was Stephen Paddock, the Las Vega shooter?

— The shooting began shortly after 10 p.m. local time (0500 UTC), interrupting a performance by country singer Jason Aldean, who was performing before a crowd of around 22,000 people. The music paused and then started again before another round of popping sounds sent the performers fleeing from the stage.

— The barrage of bullets lasted several minutes as thousands of panicked concertgoers fled the scene, seeking shelter behind barricades or beneath cars.

—  Las Vegas police responded in force, urging people to leave the area, cordoning off streets and swarming the boulevard with armed officers as they scrambled to find the gunman.

— SWAT officers found him dead in a hotel room on the 32nd floor of the Mandalay Bay Hotel and Casino where he had apparently used a hammer-like device to smash out the windows before opening fire on the crowd below, authorities said. 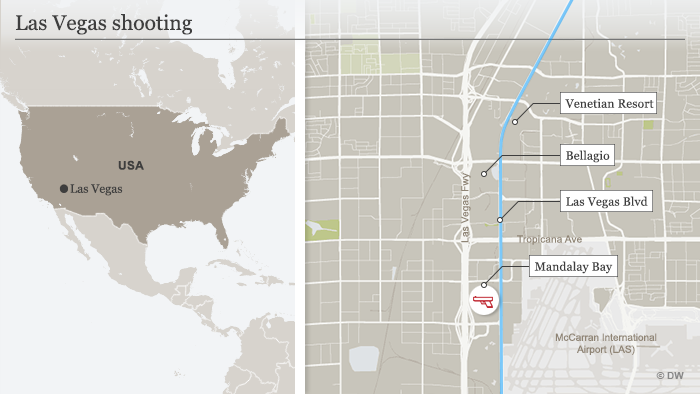 'An act of pure evil'

US President Donald Trump described the attack as an "act of pure evil" in a brief televised address to the nation on Monday.

"In moments of tragedy and horror, America comes together as one. And it always has," he said from the White House.

Trump, who said that he planned to travel to Las Vegas on Wednesday, ordered for US flags at the White House and public buildings to be flown at half-mast. Later Monday, he led a minute of silence with his wife on the White House South Lawn to honor the victims.

World leaders have been quick to respond to the events in Las Vegas, condemning the violence and sending their condolences to the United States.

German Chancellor Angela Merkel addressed a letter of condolence to Trump, saying that she had learned of the news from Las Vegas with "shock."

"Our sympathy and condolences go to the relatives and families of the victims," Merkel's statement said.

British Prime Minister Theresa May called it an "appalling attack." Russian leader Vladimir Putin described the shooting as "shocking in its cruelty." UN Secretary General Antonio Guterres was "shocked and alarmed," while Pope Francis said he was "deeply saddened" by the "senseless tragedy."

Las Vegas shooting: What is the Route 91 Harvest Festival?

Before Sunday night's shooting at the final night of the Route 91 Harvest Festival, which has so far claimed more than 50 lives, the country music event had established itself as one of the most popular in the US. (02.10.2017)

Myanmar: Reporter placed in chokehold as 6 journalists charged 2h ago