Interview: Use 'hope' to stop fear-mongers

Moderates across the EU and the US are struggling to respond after populists won the Brexit vote and the US election. As international activist Srdja Popovic told DW, it is wrong to fight extremists by stirring up fear. 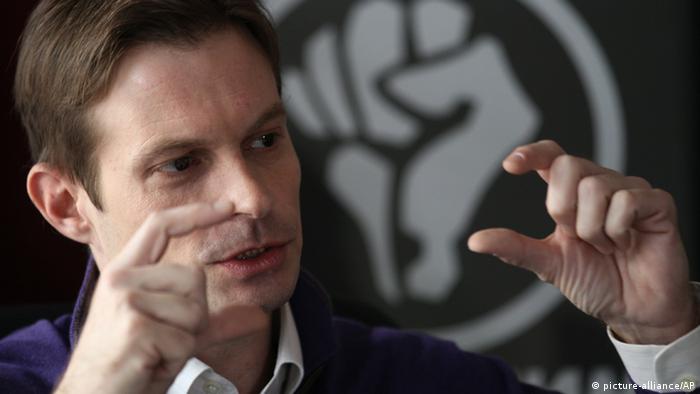 DW: Your first battle as an activist was to bring down dictator Slobodan Milosevic in your native Serbia by starting the immensely popular Otpor! (Resistance) movement. The group challenged Milosevic's autocracy, helped unite the opposition and pushed young people to vote and fight voter fraud. What tactics did you use?

Srdja Popovic: Otpor was a really cool, interesting, youth thing - it was all about creativity, street theater, and pranks. We used a lot of humor because there was widespread oppression and we were afraid that someone would get arrested. So we stuck to low-risk tactics. At the peak of Milosevic's power, Otpor painted a picture of him on an oil barrel and brought it to the central shopping street in downtown Belgrade. People were asked to donate to the movement by putting a coin in the barrel. At the same time, they could hit the barrel with a baseball bat and express their "love" for Mr. President. But that was not the funny part, because then the police arrived and the organizers were nowhere to be seen. It made no sense for them to arrest downtown shoppers for hitting the barrel because they couldn't press charges. So in the end, with media cameras rolling, they actually arrested the oil drum with Milosevic's face and brought it to the police station.

With Donald Trump winning the US election, many people are afraid of him abusing his power. Others claim that the US system of checks and balances is simply  too strong to be subverted by a firebrand president. Are the fears of a Trump dictatorship justified?

US: anger and protests after election

When you look at dictatorships, you always have a strong state governing weak people. In the US, you have the strong, established institutions. The president does not rule alone. There is the Congress, the Senate and a bunch of other government bodies, but you also have a people who are awake, and that is always a good sign. The combination of strong institutions and active citizens is a guarantee of democracy. The fact is that you can see people protesting about various issues, from racial hatred and immigration laws all the way to the proclaimed climate policy of the President-elect. You can see that people are out and are keeping a watchful eye on their representatives. When people are active, it is very, very difficult to hijack democracy.

What would you recommend to people involved in nonviolent struggle?

The idea of building a successful movement is always the same, whether you are talking about the US or some very autocratic place like Zimbabwe. First of all, you don't want to be reactive, so protesting about government policies will get you nowhere. What you want to do is stick to the wider vision, consider your values and build unity around those values. Then the strategy falls into place. In the US, the strategy would obviously be to put pressure on the institutions, because they are there, they have been democratically elected and the people running them are up for reelection in two years. Also, people must defend the institutions in the case some of them are attacked.

Modern-day movements use social media to boost their popularity. However, you have also warned of the dangers of so-called "clicktivism…"

Simply because you clicked on a Facebook page that claims it's against climate change, does not mean you have saved the polar bears. When you look at effective online campaigns, whether they are political or more like the ice bucket challenge, you understand that these campaigns are effective only if a part of them is happening in the real world. It's not just about posting - you have to be doing something in the real world and then using the internet world to spread it. Real social change happens in the real world.

There is also a mistake we call occupy-ism. Because it's easy to assemble large numbers of people through social networks, people are starting their movements and insisting on very high-risk, highly demanding occupation tactics. Look at what happened with the Umbrella-movement in Hong Kong - a million people occupied the place for 14 days and nobody ever asked themselves 'What are we going to do if our opponent, the mainland China, just ignores us?' And of course, the numbers dwindled, because it's very difficult to maintain this tactic. If they had organized a boycott of certain goods, for example, with so many people, the disruptive effect would probably have been ten times higher, the risk would have been lower and they wouldn't have been left wondering what they should do on the third or the fifth day because time would have been working for them.

How can moderates respond to the current global wave of populism?

Both the anti-Brexit people and the US Democrats were playing on fear, and every time you play on fear against a populist, you lose. The big lesson we can draw from all this, and which can be applied in France where the center is building up fear around the idea that Marine Le Pen could win, or Germany and "Alternative für Deutschland," is to play on hope! Play on institutions and values of your great societies, because when hope is the center of this type of positive campaign, the populists have less chance of winning.

Srdja Popovic is the founder and director of the Center for applied Nonviolent Action and Strategies (CANVAS) which cooperates with activists across the world. He currently teaches courses on nonviolent resistance at several universities in the US and the UK. Popovic is also the author of the book "Blueprint for Revolution."