Internet pirates walk a fine line in Germany | Germany | News and in-depth reporting from Berlin and beyond | DW | 11.11.2016 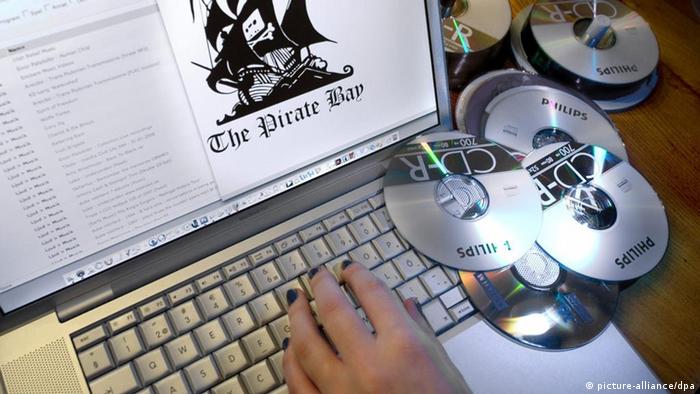 Millions of Europeans visit piracy websites every day, downloading movies, games and music for free with little or no risk of ever being caught. In most EU nations, piracy is usually not even a blip on the radar for security forces and internet providers.

Things seem to work completely differently in Germany, where breaking copyright law can carry a sentence of up to three years in jail, alongside a large fine and trial costs.

A Portuguese immigrant told DW that he downloaded pirated content "on a daily basis" in his native country. In Germany, however, piracy is too much of a risk.

"I'd rather lack in entertainment than have to pay thousands of euros in fines or go on police records for doing something wrong, especially being a foreigner in another country," said the master's student, identifying himself as Mr. Y.

The deterrence tactic seems to be working - less than 2 percent of German internet users can be considered "internet pirates," compared over 27 percent in Bulgaria and 46 percent in Latvia, according to the piracy-tracking outfit MUSO.

One of the reasons for strict copyright and anti-piracy laws is that Germany's publishers' guild is among the strongest and best organized in Europe, says Patrick Schiffer, the leader of the German Pirate Party. Schiffer's party is pushing for reform in a range of issues, including online privacy, digital democracy, and notably - changing the copyright laws, which they view as biased towards protecting publishers.

The companies "have a clear interest to keep strict copyright regulations," he told DW.

"We are going to reform the copyright in Germany, because at the moment, if you pirate a song, you'll get fines of several thousands euros," Schiffer said. "We believe this is too much."

No Wind in the Pirates' Sails from the Surveillance Scandal

No Wind in the Pirates' Sails from the Surveillance Scandal

"We don't want to make everything free, but we need to have a balance of interests," he added. "The Pirate Party is committed to strengthening the authors' rights against those of the copyright owners, because those rules restrict the rights of the public to the use of knowledge and information."

For example, it is currently illegal to take pictures of famous landmarks and publish them on Facebook in some European countries, according to the information provided by the Pirates' representative in the European Parliament, Julia Reda. The conflicting and blurry regulations could cause trouble for users who post a picture of the Eiffel tower's light show, because the show is both copyrighted and featured on a commercial website.

"The Pirate Party has no problem whatsoever with the fact that someone deserves money," said Schiffer. "Still, the authors or the publishing companies should not have the right to change the law around their business models."

Many foreigners tend to bypass the German regulation by pirating content in their home countries and then bringing data carriers across the border. However, this also carries a risk.

"The import of pirated copies on a USB stick or a data carrier is not punishable," Sascha Greier, a Cologne lawyer and expert on copyright regulations, told DW. "However, the lines are blurry here as well. The moment you use the pirated copy, for example, to put it online or copy it to your computer […] it can lead to copyright violation."

"This is punishable by up to three years in prison or a fine," he added.

Another way German users try to avoid copyright infringement is by going to illegal streaming sites. Although authorities usually tolerate it, the line between what is legal and illegal is still muddied.

"When it comes to streaming, it only means the act of playing and watching the movie and not saving it on your computer," said Greier. "According to the copyright law, the watching is not forbidden. However, duplication is forbidden according to Article 16 of the law, which also means creating a copy."

"In order to play the movie properly and allow the user to, for example, skip backwards and forwards, the streamed data is temporarily stored in the cache memory. This leads us to the question if [buffering] can be considered illegal duplication," he said. "However, according to the Article 44 of the copyright law, duplication can be exempt from the copying ban if it is only 'fleeting and supplementary" and is made for a legal purpose."

"Unfortunately, there are still no clear court rulings, neither from the German Federal Court of Justice nor from the European Court of Justice, so the legal situation is still not completely clear," Greier added. "Still, according to my perspective, it is fair to assume that streaming movies is not illegal."

When it comes to the usual Internet piracy, the Pirates' leader Schiffer says that no law can really prevent people from sharing and downloading files.

"The fact is that you can't stop it, people are doing it, and regulation cannot change what happens with data in a free world," he said.

The Pirate's solution is to give the authors power to decide on the consequences.

"The authors can decide themselves if the pirate should pay 10 or 20 euros, and how bad it all is," Schiffer said. "The law should not be as harsh as it is at the moment."

Most pirated movies in 2014: Shift Ranking of January 12